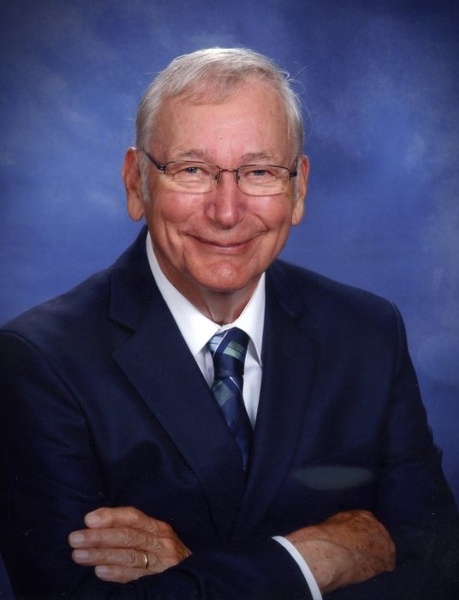 Wayne Thomas Hanson, age 83, a lifelong resident of Freeborn County entered the Kingdom of Heaven on April 4th, 2020 surrounded by his wife and children, at St. John’s Lutheran Community in Albert Lea.

Born on Friday, May 8th, 1936, Wayne was the first of four children born to Edyth (Mortensen) and Burneth Hanson of New Richland. As a young boy he went to country school and graduated from Freeborn High School in 1954, where he met the love of his life, Dorothy Ferguson. Within the next year, the high school sweethearts were wed and began life together in Albert Lea. When first married, Wayne worked at DeSoto Produce driving a truck and collecting eggs. Later he became an agent for Northwestern Mutual Life Insurance located in Albert Lea where he worked until his retirement. His children fondly remember that when he sold a policy he often came home with malts. In 1963 they built their dream house on the shores of Pickerel Lake where they lived and raised their three children David, Theresa, and Tamra until moving to Water’s Edge apartments last August.

Wayne’s reverence for nature, and ever inquisitive mind, made him a lifelong adventurer. As an avid outdoorsman, Wayne loved the thrill of a snowmobile race, the rush of canoeing a rapids, and the wallop of a fish on the hook. He relished the quieter moments in his adventures just as well, such as the solace of good campfire, the effortless ease of a nap in a hammock, and grandeur of the nature around him. An expedition to parts unknown wasn’t necessary for one of Wayne’s adventures, as just a trip across town could result in an intricate tale and reminder of important life lessons. Documentaries, books, and journal articles also satisfied Wayne’s curiosity and adventurous spirit with favorite topics including history, aviation, and outer space.

Though Wayne was an excellent fisherman, he was also a wonderful fisher of men. As a kind man with an infectious smile, Wayne was a relatable and caring member of his community. He often applied his self-taught carpentry skills and took the lead for the construction of several Habitat for Humanity homes. Wayne also delivered food and fellowship through the community Meals on the Go program. Dartball through the local Lutheran churches wasn’t just a hobby for Wayne, it was a way for him to engage with other members of his faith, to share in their trials and triumphs, to provide counsel, and to be consoled. Wayne faithfully served as an usher and worked on the Social Ministry Commission while a member of First Lutheran Church in Albert Lea.

Wayne will be lovingly remembered by his wife: Dorothy Hanson of Albert Lea; his three children: David (Stephanie) Hanson of Watertown, MN, Theresa (Tim) Horvei of Dexter, MN, and Tamra (Joel) Jokela of Vergas, MN; his two grandchildren: Adam Konieska of Fargo, ND, and Kathryn Konieska of Carrollton, TX; his brother: Gary Hanson of Plymouth, MN; his two sisters: Diann (Robert) Anderson of Willmar, MN, and Mary (Gary) Eagan of New Prague, MN as well as many nieces and nephews.

Memorial Services for Wayne will be held at 11:00 A.M. on Thursday August 20, at the First Lutheran Church in Albert Lea. Friends may visit with family from 10:00 A.M. until the time of the service at the church. Masks will be required and social distancing protocol will be followed.

To order memorial trees or send flowers to the family in memory of Wayne Hanson, please visit our flower store.