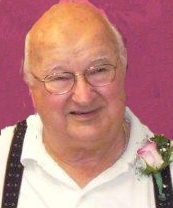 On Sunday, May 31st, 2020, Victor Francis Soller, husband and father, passed away at age 93 in Cheyenne, Wyoming.  Vic was born on May 31, 1927 in LaCrosse Wisconsin. He lived in Minneapolis where he met and married Joan (Kalinoski). After a number of years they moved to Albert Lea and lived there for over 50 years. They have 4 children; Colleen Eifealdt (Cheyenne WY), Jeff (Shawnee KS), Dave (Rock Springs, WY), and Dan, (Crosslake MN). They were blessed with 6 grandchildren and 5 great-grandchildren.  He is survived by his sister Pat (Tom) Taylor (LaCrosse WI) as well as numerous nieces and nephews.   Vic worked at Streater’s Industries his entire career and retired from them May 31st 1992.  He was a practicing Catholic and was an active member of St Theodore’s Catholic Church in Albert Lea before moving to Cheyenne. Vic was also a Boy Scout leader for many years mentoring numerous Eagle Scouts and spent many summers at Camp Cuyuna in Crosslake MN. He was honored with the Sertoma Man of the Year award for distinguished service to others.

Vic’s passions were stamp collecting, reading, puzzles, camera club, Boy Scouts, model airplane building, cribbage & Genealogy. Vic spent the last 12 years living with his daughter Colleen and husband Judd in Cheyenne where his quality of life was exceptional, especially when you can spend it every day with someone you love.

A Memorial Service will be held on 11:00 A.M. on  Friday,  September 11, 2020 at St. Theodore Catholic Church in Albert Lea.  All friends and relatives are welcome.

In lieu of flowers, memorials may be sent to Bonnerup Funeral Service. The family has set up a trust fund with the American Stroke Association.  Vic’s wife Joan suffered greatly from strokes and it would only seem appropriate to help find a cure for something that eventually took his loving wife.

To order memorial trees or send flowers to the family in memory of Victor Soller, please visit our flower store.