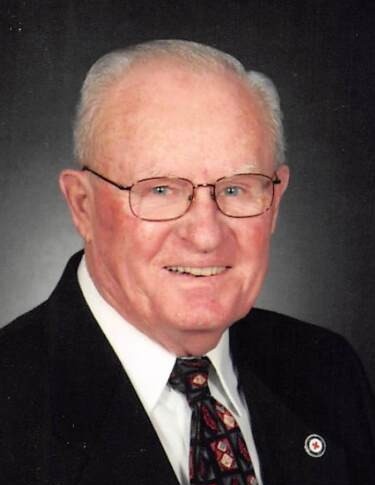 Timothy Donald "Don" Cashin of Albert Lea, Minnesota, died December 11, 2020 at home from complications of COVID in the care of Mayo Hospice, surrounded by family members.

Don was born April 29, 1929 in Montgomery Minnesota to John and Cecilia (Shaughnessy) Cashin and was raised on a farm. He attended school in a one room school-house and graduated from Montgomery high school in 1947. He graduated from the U of WI Graduate School of Banking and the American Institute of Banking. He attended post graduate school of banking 1971 and 1978. Don married Betty (Gabriel) Nov 11, 1950 at St. Augustine Catholic Church in Austin Minnesota.

In 1983 Pipestone Minnesota First Bank was consolidated with Luverne where he held joint responsibility of both banks. In 1987, First Bank was sold to the Bob Short family of Minneapolis and Don became President, C.E.O., and Board Chairman of the newly named First Farmers and Merchants National Bank. He was a Director of the Minnesota Bankers Association from 1994-97 before retiring in 2006, at which time he and Betty returned to Albert Lea.

Jaycees, President of the Albert Lea Lion’s Club and Head of the Third and Fourth Degree of the KCs and District Deputy of Albert Lea KCs.

While in Luverne, Don was President of the Country Club and Chamber of Commerce. He served on chamber committees such as Chamber Ambassadors and Green Earth Players. He was

Secretary/Treasurer of the Economic Development Corporation and Board Member of the Community Hospital. Don received the Paul Harris Fellowship in Rotary in 2006.

Don especially enjoyed time with his family and friends and had the thrill of attaining four holes-in-one in his golfing efforts.

A celebration of life will be postponed until next summer due to COVID restrictions.

To order memorial trees or send flowers to the family in memory of Timothy Cashin, please visit our flower store.