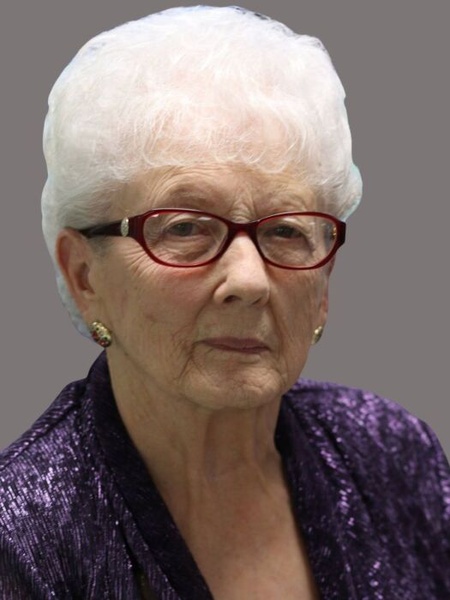 Theresa C. (Balbach) Jackson was born on May 3, 1924, at home in Dotson, MN,  the daughter of Ernest and Sara (Cartin) Balbach. She attended rural schools until high school. She then attended Blooming Prairie High School until her senior year, graduating from Ellendale High School in 1942. She then went on to attend and graduated from the Naeve School of Nursing with her R.N. degree in 1946.  She married Jesse J. Jackson on June 3, 1946, at St. Mary’s Catholic Church, Newry Township, to this union four children were born, Robin, Philip, Vicki and John.  Theresa raised her family, helped Jesse in his ambulance business and pursued her passion for nursing as well.

Theresa worked as an R.N. at Naeve Hospital upon graduation in 1946 until 1956 when she went to work for a short time for Garret Folken, MD, in his ENT practice and then went to work in 1960 for Theodore Gill, MD, in his ophthalmology practice until Dr. Gill joined the Albert Lea Regional Medical Group. Theresa then worked as an ophthalmology nurse for Albert Lea Regional Medical Group until her retirement in 1989. Upon retirement, she spent many hours volunteering for various organizations within the community including St. John’s Lutheran Home, Senior Resources, Naeve Partners in Health along with other groups within the Albert Lea community.  Theresa was strong in her faith, and had been a member of St. Theodore’s Catholic Church since 1943, where she had served as a eucharistic minister and other roles, and St. Theodore’s Catholic School in numerous and varied capacities.  Theresa also provided respite care for several families caring for elderly family members in their homes. Theresa helped establish a grief support group and provided grief support counseling for several years.

Theresa lived her life giving, sharing and showing empathy and kindness for others.

The family is planning private services with interment in St. Theodore Catholic Cemetery.

In lieu of flowers, the family requests that memorials in Theresa’s name be directed to Hospice of North Iowa, 232, 2nd Street SW, Mason City, IA 50401.

Condolences and notes of sympathy may be sent in care of the Jackson family to:  Bonnerup Funeral Service, 2210 East Main, Albert Lea, Minnesota  56007

To order memorial trees or send flowers to the family in memory of Theresa Jackson, please visit our flower store.