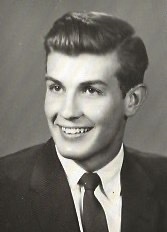 Ted was born April 8, 1934 in Judson, MN, the son of Roy C. and Viola (Heaston) Anderson. He grew up in Saint Peter area and in many small communities in SD. He was a graduate of Worthing High School in SD and continued his education at Gustavus College in St Peter, MN. He wrestled for GAC and graduated in 1956. He served in the National Guard from 1957 to 1960. He earned a Master’s degree from the U of MN in 1972. He taught at Ogilvie, Gibbon, and for 32 years in Albert Lea at both Brookside and Southwest, where he primarily taught 7 th grade life science. He was director of the Summer Science program in Albert Lea for several years.

Ted was united in marriage to Joan Ann Shogren on October 2, 1965 in St Peter, MN . He was a member of the First Lutheran Church in St Peter and then Albert Lea, MN. Ted enjoyed volunteering, bowling, basketball, hunting and fishing, gardening, camping, watching sports, handy work around the house, and being outdoors. He was a conservationist and enjoyed giving to his favorite charities.

He was preceded in death by his wife Joan, mother (Viola) and father (Roy).

To order memorial trees or send flowers to the family in memory of Theodore "Ted" Anderson, please visit our flower store.