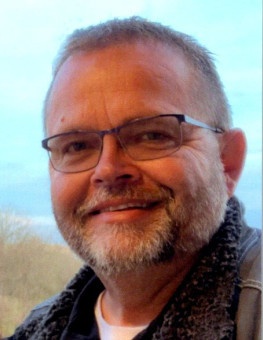 Steven Kip Olson, 54, of Albert Lea, MN, passed away on September 8, 2022, from injuries sustained in a motorcycle accident.

Steven was born on March 5, 1968, to Larry and Judith (Broskoff) Olson in Albert Lea, MN.  He was raised in Albert Lea in the Olson family home.  Before he even began walking, he began talking to random shoppers at the grocery store; so, his love for talking with people was very obvious from the beginning.  As a youngster he was active in the Riceland Ramblers 4-H Club, showing pigs and was a pitcher on the 4-H softball team. Bike stunts were his specialty and Steve would put on Evil Knievel stunt shows to anyone who would watch.  He attended Hayward elementary school and graduated from Albert Lea high school. Following his graduation, he attended Albert Lea Vocational College for welding.  In the summer of 1988, he met the love of his life, Sonya Edgerton.  He later proposed to her while on vacation at Lake Mary, Alexandria, MN, and they were wed on October 13, 1990.  Together they raised two sons, Jordon and Cody; Steve was so proud of them!

Steve was a baptized, confirmed, and a lifelong member of East Freeborn Church in Albert Lea, MN where he was active in Sunday School programs and Luther League as a child and was head usher in his most recent years.  Throughout his life he was involved in many organizations such as the Special Olympics as a bowler, Bowling League; bowling on a team with his dad and son, the Riceland Township Board as a Supervisor, and various softball leagues.  He was even a member of the G.A.S. Club, which stands for Gina, Angie, and Steve and served as the silver bullet.  Steve’s first job was helping his grandpa on the farm and later worked at Ace hardware, Bridon Cordage and most recently for the City of Albert Lea.  One of the first cars he owned was a Ford Mustang and his love for hot rods grew from there, with his two sons working by his side.  He even started a private club called Hoprodz where he could discuss anything car related with his family.  But his biggest passion was for his family; he loved nothing more than spending time with them.  He especially adored his 4 grandchildren and enjoyed giving them rides on the 4-wheeler.  The annual family trip to Alexandria, MN has been a host of lake memories for 54 years.  Tuesday evenings were reserved for a weekly “date night” with his wife, Sonya, and special friends, Deb & Wendell Schillling.  Steve was the most thoughtful, kind, and caring person to everyone he met; and everyone he met became his friend.  He was always present and involved and was always the first one to help and the last one to leave.

To order memorial trees or send flowers to the family in memory of Steven Olson, please visit our flower store.