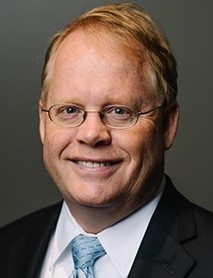 Stephen Thomas Brownlow, 55, of Albert Lea passed away on April 22, 2020 due to complications from a stroke.

Steve was born on April 13, 1965 to Neil and Shirlie (Marburger) Brownlow. He was proud to be a lifelong resident of Albert Lea. He graduated from Albert Lea High School and Gustavus Adolphus College. He worked his entire career with the Arends family and was currently a Senior Consultant at Intellicents.

Steve was united in marriage to Gayle Hintermeister on December 21, 1996. They had three children, Sean, Dane and Lauren. Being a father was everything to Steve. He pushed his children to be good people who work hard, serve others, and have fun along the way.

He was an Eagle Scout who lived by the slogan, “Do a good turn daily”. He was a mentor to Andrew and countless other youth as a scout leader and coach of baseball and basketball. He was especially proud of guiding other young men to achieving the rank of Eagle Scout. He served on community boards including the Naeve Health Care Foundation and the Albert Lea Education Foundation. He was an elder and deacon at First Presbyterian Church. He was passionate about serving his clients. If there was a way to help others, Steve would do it.

Steve loved the outdoors and being active. He loved fishing with his dad and his good friend John Lawson. His favorite moments were on the sidelines watching his children in their sports and activities. Steve was a man of faith who walked along the path of life guided by his Heavenly Father.

He is survived by his wife Gayle and children Sean, Dane, and Lauren; his mother Shirlie Brownlow, brother Brian (Karen) Brownlow and sisters Lisa (Paul) Young and Mary Brownlow (Rick Muench) and their families, and aunts, uncles and cousins. He was preceded in death by father Neil Brownlow, and grandparents Harold and Madeline Brownlow and Sylvester and Lucille Marburger.

A celebration of Steve’s life will be held at  11:00 A.M. on Saturday, August 1, at the First Presbyterian Church of Albert Lea.  Visitation will be held from 5 - 8 on Friday, July 31 at Bonnerup Funeral Service.  Masks will be required for the visitation and service and social distancing protocol will be followed.

The family requests memorials to First Presbyterian Church, the Albert Lea Education Foundation, or any other organization that exemplifies Steve’s empathetic approach to life.

To order memorial trees or send flowers to the family in memory of Stephen Brownlow, please visit our flower store.