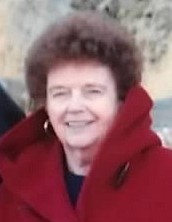 Shirley Ellinghuysen was born September 21st, 1928 to Alden and Leila Hall in Spring Valley Minnesota. She passed on April 8, 2021.

She also attended High School in Spring Valley. She worked a short time at Mayo Clinic before marrying Lyle Ellinghuysen in January 1951.

She was the mother of two children, Jerry and Jim and one Granddaughter, Anne (Jeneary). She is preceded in death by her parents. Her husband Lyle died in 2007.

Shirley was a long-time resident of southern Minnesota and Albert Lea. After a stint of husband Lyle’s active duty in the Navy, which took her to several places throughout the country, the family returned to Minnesota when Lyle took a position as a teacher and coach in Albert Lea in 1962.

Shirley was a member of Salem Lutheran Church and remained an attending member as long as health allowed.

Shirley loved being a Mom and a wife and spent countless hours attending sporting events for both her children and for Lyle, who was a coach of various sports within the Albert Lea school system.

Shirley loved Albert Lea.  Her later years were spent at Thorne Crest in Albert Lea, both in assisted living and then in the skilled nursing wing. As was her way, she remained optimistic and outgoing until the end. Often speaking of Thorne Crest as “being on vacation.”

A memorial will be held Wednesday, April 28, 2021 at Bonnerup Funeral Home in Albert Lea at 2:00 pm with visitation at 1:00.  Pastor Todd Walsh will officiate.

To order memorial trees or send flowers to the family in memory of Shirley Ellinghuysen, please visit our flower store.