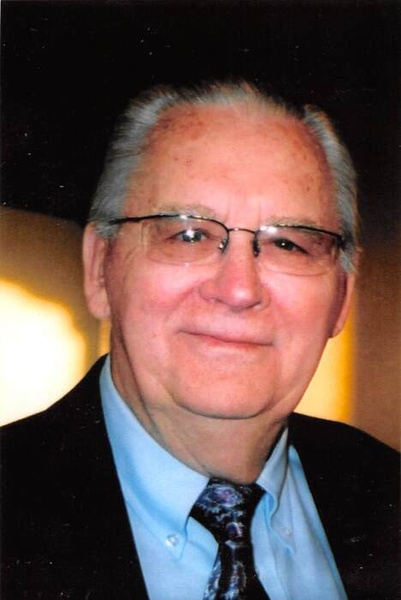 He was drafted into the United States Army as a Rifleman Sharpshooter and then to the National Guard.  While in the military, he was stationed at Camp Rucker in Alabama for a year and a half before being sent back to Albert Lea.

On March 20, 1951, Russ married the love of his life, Phillis “Phiz” Nelson in St. Petersburg, FL.  Together they raised two daughters: Nancy and Peggy.

Russ co-owned Albert Lea Ice and Fuel Co. with his father, Eddie; worked at Wilson Foods; and Albert Lea Mayo Pharmacy. Russ was an active member of the “Christ Episcopal Church”, was involved with the Jaycee’s, the American Legion, and some local civic groups.

In his younger days, Russ was known as “Albert Lea’s best dancer”.  Golfing was his true passion; he taught his sons-in-law and grandson how to play.  He even made a hole in one!  He enjoyed Monday night bowling league and won the “City Championship” in the late 50’s-early 60’s. Russ loved music so much that he taught himself play the piano by ear. He also loved singing, especially during the holidays and anywhere that had karaoke.  Somewhere out there, someone has the record he made. He was an avid sports fan, and enjoyed following the Minnesota Vikings, Minnesota Twins, and Green Bay Packers.

Family was everything.  He will be remembered as kind and a true gentleman. His gentle sprit and love for his friends and family will be greatly missed.

Preceding him in death were his parents, Eddie and Martha; his brother and sister-in-law, Stuart and Lavonne Olson; his sisters-in-law, Wilma “Billie” Nelson and Susan Trammel; brother-in-law, Kenneth Olsen; and his mother and father-in-law, Edgar and Ella Nelson.

A special “thank you” to the entire staff at Thorne Crest, for taking such good care of Russ.

To order memorial trees or send flowers to the family in memory of Russell "Russ" Olson, please visit our flower store.