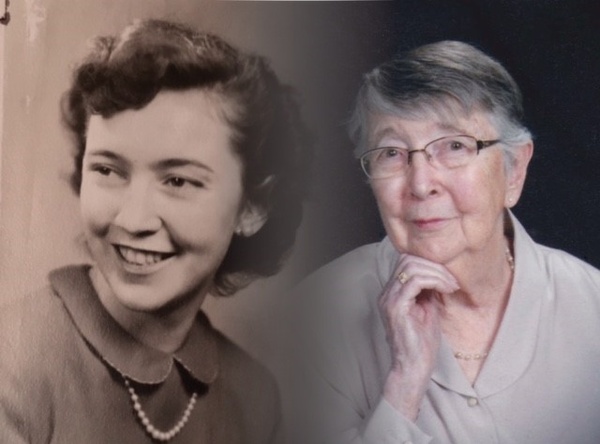 Funeral services for Rose Ann Zgoda will be held at 10 a.m. Tuesday, January 19, 2021 at St. Theodore Catholic Church after she died peacefully at rest five nights earlier at home in Albert Lea. She was 93.

A resident at Thorne Crest Senior Living Community for five happy years, Rose Ann came home on Christmas Eve to live with her daughter Teresa, where she celebrated the Christmas holidays, 2021’s arrival and her birthday surrounded by her family and embraced with their love.

She had contracted Covid-19 in late October and never fully recovered. Interment will be in St. Theodore Catholic Cemetery.

Rose Ann was born on January 2, 1928 -- three months after workers began carving Mount Rushmore – the third of eight children to Thomas McNary and Eleanor (Gage) McNary. He was a carpenter and wallpaper hanger who played the piano, fiddle and sang, too. She was a candy maker and prolific canner of backyard-garden goods who helped the family survive the Great Depression in Kellogg, Minn.

Rose attended school there in the Mississippi River bluff country before she graduated from St. Felix High School in Wabasha, Minn. in June 1945, just as World War II approached its end.

Rose wanted to be a nurse, but blood made her squeamish and she considered herself too outspoken with her opinions, a trait she exhibited until late in life.

So she became a teacher.

In 1947, Rose earned a two-year teaching diploma from Winona State College. She taught first grade in her first job in Ivanhoe, Minn., where she met the young man who became her husband: Carol Raymond Zgoda, a rugged, handsome farm boy and butter-maker who could carry a heavy cream can on each shoulder in the small southwestern Minnesota town.

They married there on August 20, 1949 at St. Peter and Paul’s Church. The next year, Rose gave birth to their first of four children, a daughter they named Mary Carol. Soon after, Carol joined Wilson & Company meatpacking as a salesman, a job that soon took the young, growing family to Rochester, Minn., where Teresa was born in 1955, and Lansing, Mich., where Rose taught elementary school and gave birth to their first son Jerry in 1960.

They returned to Minnesota that same year, settling in suburban Richfield for the next six years where the couple’s youngest child Karl was born. Wilson & Co. transferred Carol to its Albert Lea complex and stockyards in 1966, the town Rose and Carol would make their home two different times.

A busy mother of four, Rose Ann nonetheless returned to her studies in 1969 at Mankato State University. She made the 60-mile drive regularly to receive a Bachelor of Science degree in elementary education and later a Masters’ degree in special education.

When her family moved yet again -- to Burnsville in 1974 -- Rose Ann commuted to teach learning-disabled students in Cottage Grove and Faribault. She retired from teaching at age 57 when Wilson & Co. moved Carol and Rose back to Albert Lea, where she lived the rest of her days with a servant’s heart.

Rose Ann was a longtime member of St. Theodore Catholic Church, where she was active in the Council of Catholic Women and served as president for a two-year term. She also was vice president of the Austin Area CCW and was an active participant in Ministry of Care, administering to hospital and home-bound patients for many years.

She loved music and writing and dancing to the big-band music of the 1940s, on Saturday nights in dance halls across the countryside for 12 cents’ admission. She had her photograph once taken with famed bandleader Woody Herman.

Decades later, approaching her 60s, she wrote a poem for her own obituary:

Earth-bound I will not be

Nor will I travel out to sea.

I have laughed and loved and cried with many

But I wouldn’t trade it for a penny

My hours with you have been all too few

But you will make some friends anew

Alas the Lord has called me home

Never more the Earth to roam

She also is survived by siblings Maxine and her husband Victor Feliciano of Charleston, S.C., brother Richard McNary of Louisville, Kentucky and many nieces and nephews.

Special thanks to all the workers at Thorne Crest and everyone at Embrace Home Care and Mayo Health System Hospice Albert Lea as well all these last weeks.

To order memorial trees or send flowers to the family in memory of Rose Zgoda, please visit our flower store.