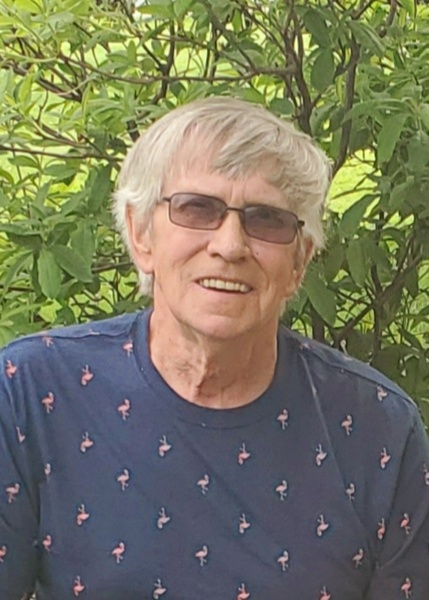 Funeral services for Ronald T. Ellegard of Albert Lea, MN, will be held at 10:00 AM Saturday, August 10, 2019 at the Oakland Lutheran Church Oakland Township, MN. Pastor Joshua Enderson will officiate. Visitation will be held Friday evening from 4:00 until 7:00 PM at Bonnerup Funeral Service in Albert Lea, MN and one hour prior to the service at the church. Interment will be at the Oakland Cemetery. Military honors will be accorded by the Albert Lea Area Veterans Group. Ron passed away unexpectedly Saturday, August 3, 2019 at his home in Albert Lea. He was 70 years of age. Ron was born June 2, 1949 in Albert Lea, MN. He was the son of Vernon and Harriet (Nelson) Ellegard. Ron graduated from Albert Lea High School in 1967 and enlisted in the US Navy in 1969. He was honorably discharged in 1971 from Navy Ship USS Oriskany CVA-34. Ron completed his college education at Riverland College and specialized in Auto Body Repair. In 1977, Ron was united in marriage to Susan (Leidal) Goodnature and later divorced. Their union brought Kelly (step-daughter), Kerri, Kristy, and Rory. Ron kept himself very active throughout his years with a variety of jobs and hobbies. He spent a few years farming, working at the Hayward Elevator, and driving gravel truck. Ron had a passion and gift for auto body repair. He worked out of his home to repair cars and trucks for family and friends. Ron later retired from Enderes Tool Company and the Steelworkers Union 6803. Ron was a member of the Oakland Lutheran Church. He enjoyed riding motorcycle, reading Louis L’Amour, watching John Wayne Westerns, Vikings, Twins and Nascar. Ron loved to travel often hitting the road to explore new adventures. He frequently traveled to spend time with his family in Arizona. Ron enjoyed attending Veteran events and having morning coffee with his good friends at McDonalds. One of his greatest joys was the time he spent with his children and grandchildren. Ron was “Grandpa” to the letter. Whether it was spending time with the boys on the farm, riding ATV’s, playing in the pool with the girls, sliding down Skinner’s Hill, going on a spontaneous adventure, or wearing the ugly sweater at Christmas, Ron was about doing it all. He valued family, cherished his grandchildren and treasured the time with his children. Ron is survived by his children Kelly (Laurie Oelslager) Goodnature of Mankato, MN, Kerri Ellegard of Minnesota Lake, MN, Kristy (Jon Rathke) Ellegard of Austin, MN, Rory (Reina) Ellegard of Chandler, AZ. Grandchildren include Karter, Kole, Ashley, Kaylee, Brinley and Cooper. One sister survives Karen (David) VanReese of Hollandale, MN, niece Tiffany (Brent) Smith and their daughter Emily, and nephew Timothy (Amber) VanReese and their son Hunter, aunt Marlene Wiese of Iowa and many cousins. He was preceded in death by his parents Vernon and Harriet (Nelson) Ellegard, grandparents, great uncle Henry Ellegard, an aunt, an uncle, and cousins including Colby Sailor and Greg Hatle.
To order memorial trees or send flowers to the family in memory of Ronald Ellegard, please visit our flower store.