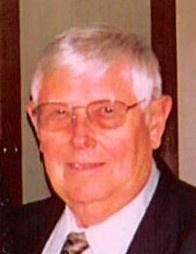 On Tuesday, May 25, 2021, Roger Luverne Bailey, loving husband, and father of four children, passed away at the age of 93.

Roger was born on March 12, 1928, in Glenville, MN to Howard and Minnie (Johnson) Bailey.  He attended the Glenville and Albert Lea schools.  At the age of 17, Roger enlisted in the U.S. Navy and served in the South Pacific at the end of WWII.  He returned to graduate with the Albert Lea class of 1947.  Roger met his wife, Lois Heegard, in high school, and they were married on March 21, 1948.  Roger worked various jobs that included Sorensen Brother’s Construction, Standard Oil bulk delivery, and Bailey’s Standard Service in Albert Lea.

Roger and Lois enjoyed 10 years of winters in Mesa, AZ, and 38 years of summers at their cabin on Lake Belle Taine in Nevis, MN.  Roger’s caring personality was evident by many acts of kindness and his service to the community. He was a Boy Scout leader and a member of the Glenville Boosters, volunteer fire department, city council, American Legion, and the Albert Lea Elks. Roger’s interests included trapshooting, fishing, woodworking, and being a devoted friend to the many dogs he owned. He also enjoyed participating in the World War II Honor Flight to Washington, D.C. in 2009.

Roger was preceded in death by his parents; his brother, Melvin Bailey; and his grandson, Jesse Sherman.

Funeral services will be held at 2:00 p.m. Tuesday, June 1, 2021 at First Lutheran Church in Glenville with Pastor David Engen officiating.  Time for visitation will take place one hour before services.  Unvaccinated attendees are asked to wear a mask within the church. Interment will follow at Greenwood Cemetery in Glenville.

The family is grateful to the staff at Good Samaritan and Mayo Hospice for their loving care of Roger.  Memorials may be sent to First Lutheran Church of Glenville or Mayo Clinic Health System Hospice of Albert Lea.

To order memorial trees or send flowers to the family in memory of Roger Bailey, please visit our flower store.