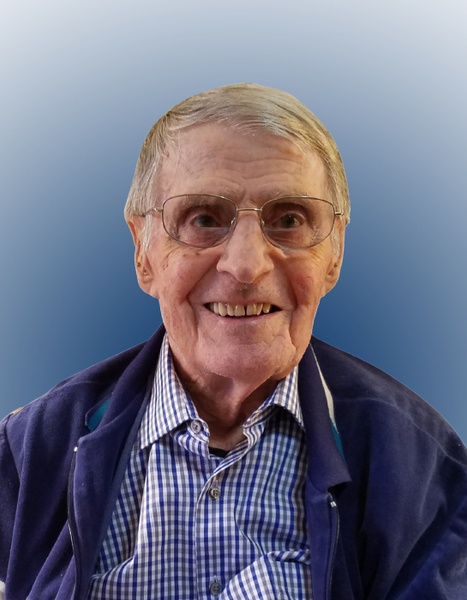 Robert ‘Bob’ Russell Moreau passed away on Monday, March 22, 2021 at the Thorne Crest Independent Living Community.  Blessed to the age of 93, he was devoted to his family and friends with a strong faith in God.

A celebration of life will be held at 2:00 pm, Saturday, April 3, 2021 at Grace Lutheran Church, Albert Lea, MN. Pastor Shane Koepke will officiate. Family and friends may gather for a visitation at the church one hour prior to the service.

Bob was born in Faribault, MN on October 1, 1927 to Edward and Sarah (Miller) Moreau. He graduated from Faribault High School in 1945 and joined the Merchant Marines that fall, serving four years.  In 1950, he was drafted into the US Army during the Korean War, fighting on the front lines, reaching the rank of Sergeant Major. On August 24, 1952 Bob married Bernice Johnson. The couple was blessed with 2 daughters. He spent over 20 years working for Western Grocer/Consolidate Foods. In 1969, Bob was hired as Business Manager for Albert Lea School District 241 until his retirement in 1989. Bob and Bernice were blessed to be ‘Winter Texans’ for 30 years, enjoying 27 years at Tropic Star Resort in Pharr, TX.

An outdoorsman through and through, Bob enjoyed fishing trips in northern MN and Canada. He was an avid hunter of deer, moose, pheasant, and wild turkey. Bob loved camping, golf, bowling, riding tail gunner with Tropic Star ‘Bike to Breakfast Club’, playing on the softball team, and was dedicated to his men’s coffee group at Hardees. His military service was recognized in 2011 on an Honor Flight to Washington, DC. His love of old cars lead to the restoration of a 1929 Ford Model A. Annual trips to the Gopher/Hawkeye football games with high school classmates and 2 driving trips to Alaska with Bernice in their pick-up camper were memorable life highlights.

In honor of his granddaughter, Dr. Sara Skrlin, Bob generously donated his body to the Mayo Clinic Bequest Program.  He will be cremated and at a later date buried at Maple Lawn Cemetery, Faribault, MN.

He is preceded in death by his parents, Edward and Sarah Moreau; brother and sister-in-law Gerald “Moe” and Jeanne Moreau; and in-laws, Iver and Esther Johnson.

To order memorial trees or send flowers to the family in memory of Robert 'Bob' Moreau, please visit our flower store.