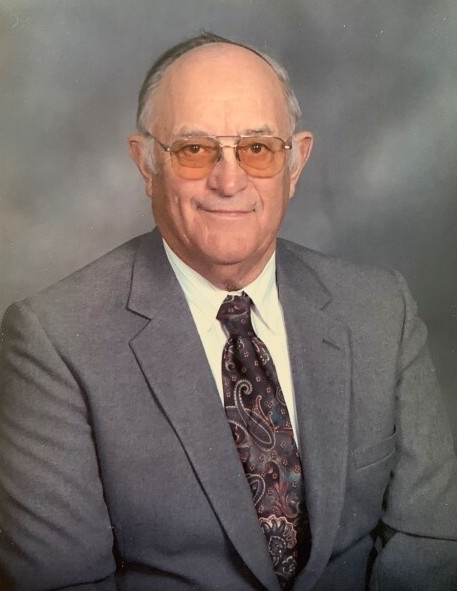 Robert LuVern ‘Bob’ Swearingen passed away on April 16, 2021 at the Prairie Manor Care Center in Blooming Prairie. He was 96 years old.

A visitation for Bob will take place at 1:00pm on Sunday, April 25, 2021 with a memorial service to follow at 2:00pm at the First Lutheran Church of Ellendale. Pastor Wendell Anderson will officiate.

Robert was born on October 23, 1924 to Marion and Helen (Berg) Swearingen. Faith was important in his family and Bob was baptized, confirmed and a lifelong member of the First Lutheran Church of Ellendale. He was a graduate of Ellendale High School. On April 14, 1946 he was married to LaVon Marjorie ‘Marj’ Jensen. To their union, five children were born. The couple remained in the Ellendale area, where Bob farmed near his brothers.

As a lifelong farmer, Bob kept very busy in his younger years and he retired in 1988. Upon retiring, Bob, Marj and their children did a lot of camping around Lanesboro, Waseca and in Iowa and Wisconsin. For over twenty years, Bob and Marj would head to Lake Havasu, AZ to spend their winters. They also made their way to England where their son, Roger, was stationed. Bob joined the Prairie Manor community in 2013, and he immersed himself in all of the activities, from playing cards and dice to bingo and helping the ladies bake. He loved the people there and was equally loved back.

Bob also loved being a grandpa and great grandpa. He was very involved with them and especially loved shopping for cards and gifts. When receiving a card from Bob, they knew that he took a lot of time and effort deciding which one would be perfect.

He is preceded in death by his wife, Marj; daughter, Jean Thostenson; grandchildren, DJ Nolan and Amy Holmes; parents, Marion and Helen; and brothers, Merlyn, Marlyn and Lowell ‘Pete’ Swearingen.

To order memorial trees or send flowers to the family in memory of Robert Swearingen, please visit our flower store.