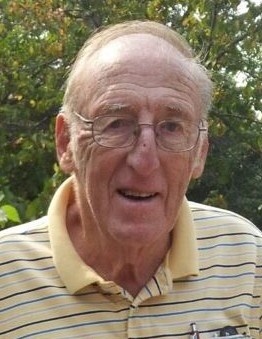 Robert Freeman Condon, known as Bob, age 90, Rochester, formerly Litchfield and Albert Lea, died on Tuesday, February 22nd 2022 at his residence in Rochester. A Visitation will be held at Ranfranz and Vine on Friday, March 4th from 5 to 7, and for one hour prior to the service. A Mass of Christian Burial will be held at Holy Spirit Catholic Church, Rochester on Saturday, March 5th at 11 AM. Interment will be held at Fort Snelling National Cemetery, Minneapolis.

Bob was born on May 25, 1931 in Minneapolis, son of Freeman Patrick and Florence (Boeser) Condon. He grew up in NE Minneapolis, with his parents and his sister, Ihlia. As a young man, Bob worked at C&C Boat Works in Crosslake, pumping gas on the channel between Cross Lake and Daggett Lake as boats traveled between the lakes. He graduated from De La Salle High School on Nicollet Island, Minneapolis, in 1950 and attended St. Mary's College in Winona for a year. His dad, Freeman, died on February 15, 1951. Bob, his dad and his grandfather had all worked for the Soo Line Railroad. Bob served in the US Navy from July 13, 1951 to July 10, 1955 and was stationed on the USS Fremont out of Norfolk, VA. He was united in marriage with Gretchen Kay Kielty on November 8, 1952 at St. Charles Borromeo Catholic Church in NE Minneapolis, their wedding was delayed from September due to his ship being stuck in the Mediterranean waiting for their relief. While stationed in Norfolk, Bob and Gretch were blessed with two sons.

After returning to Minneapolis, Bob attended the University of Minnesota and graduated from the Program of Mortuary Science in 1958. While in Minneapolis, they added a daughter and a son to the family. After graduating, Bob took a job as a mortician/funeral director at the Bonnerup and Son Funeral Home in Albert Lea, where he worked for twenty-two years until early 1980. During their time in Albert Lea, three daughters and a son joined the family. Bob and Gretch were very active in their church, St. Theodore's Catholic Church, Knights of Columbus and their community, bowling, golf, Bridge Club, etc., and raising their family of eight children. In 1980, he quit to help his son, Mike, in Park Rapids, while trying to buy the funeral home there. When that opportunity fell through, Bob and Gretch ended up moving to Litchfield where he continued his career in Funeral Service with the Johnson-Hagglund Funeral Home until retiring in June of 1994. He retained his license as a Funeral Director and received his 50 year plaque at the MN Funeral Directors Convention. During their time in Litchfield, they were active in their church, St. Philip's Catholic Church and the community.

Since moving to the retirement community at Shorewood four years ago, Bob and Gretch were able to stay in the Independent Living side of the complex until recently when health issues forced the move to the Assisted Living side of their complex.

Memorials are preferred to the Alzheimers Association www.alz.org. Arrangements have been entrusted to the Ranfranz and Vine Funeral Home in Rochester.

To order memorial trees or send flowers to the family in memory of Robert Condon, please visit our flower store.