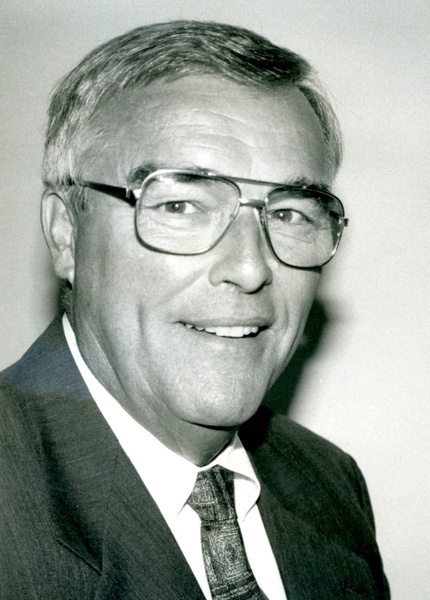 RICHARD LEE ‘DICK’ KOGEL, 82, of Albert Lea, MN passed away on Tuesday, October 23, 2018. He was born August 24, 1936 in Huron, South Dakota to Paul and Jean Kogel. A service of remembrance will be held on Friday, Nov. 2nd at 3:00 at Bonnerup Funeral Service in Albert Lea, with a celebration of his life to follow. Dick graduated Cathedral High School in Sioux Falls in 1954. Following service in the United States Marine Corps, Dick attended Sioux Falls College. Dick and Joyce were wed in 1959. After a stay in Marshall, MN where Dick worked in sales for Murphy Motor Freight, they settled in Albert Lea in 1963, where Dick for many years owned and operated Kogel Transfer Inc. He subsequently worked for Enderes Tool, Bill Olson Chevrolet, Edwards Manufacturing and in his later years he enjoyed transporting vehicles for Dave Syverson Ford. Dick was very involved in the community, active with Jobs, Inc., the Chamber of Commerce, the Elks, American Legion, the Board of Lea College, the Sparky Charity Golf Tournament amongst others. Dick rarely missed an opportunity to hear or tell a joke, as anyone who knew him can attest. He often said that one of his greatest joys in life was making people laugh. Dick showed his joy of being on stage through his numerous performances in Albert Lea Community theatre productions. Another joy was travel, which he proudly claimed took him to every state but Alaska. Dick loved life and always tried to get the most out of it. He enjoyed golfing and time spent with friends and family at the Albert Lea Country Club. There really weren’t many life experiences Dick didn't try to participate in. He enjoyed fishing trips, boating/waterskiing, biking, snowmobiling, tennis, bowling, family vacations, golfing, playing gin rummy, wintering in Palm Desert, CA and last but not least he loved playing with his grandchildren, and they in turn adored their fun-loving grandpa. Dick - husband, dad, grandpa, brother, uncle, friend - lived with gusto and is already greatly missed by those who knew him. Dick is survived by his wife of 59 years, Joyce, sons Ryan (Gena) Kogel and Randy Kogel of Albert Lea, daughters Stephanie Tafoya of Dana Point, CA and Denise (Mike) Gilbert of Ladera Ranch, CA, brother Robert (Laura) Kogel, sisters Jane Kogel and Kathy Christensen of Sioux Falls, SD, and Debbie Stoltmann of Portland, OR. Also his beloved grandchildren Sabra Kogel, Ashton Kogel, Nicole (Keith) Barrett, Amanda (Spencer) Caldwell, Blake (Danielle) Tafoya, Spencer Gilbert and Madison Gilbert. Dick was preceded in passing by his parents and his brother Paul.
To order memorial trees or send flowers to the family in memory of Richard Kogel, please visit our flower store.