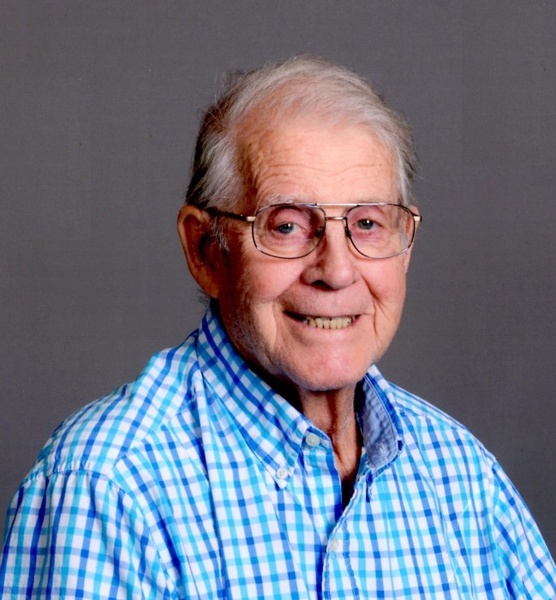 A memorial service for Richard F. Herwig Sr. will be held at 2:00 PM on Saturday, August 25, 2018 at First Presbyterian Church, Albert Lea, with burial following at Lakewood Cemetery. The Rev. Dwight Netzer will officiate. Visitation will take place one hour prior to the service at the church. The remembrance service scheduled for 6:00 pm on Friday, August 24, 2018 at Bonnerup Funeral Home has been cancelled.

Richard was born on November 24, 1928 to Forrest and Addie (Martzluf) Herwig in Pontiac, Illinois. He graduated from Pontiac High School in 1947. After meeting Rita (Jobst) in 1944, they married on February 3, 1951. They had six children. After living in five different states while Richard was in the Army (during the Korean War) and later with Spurgeon’s Department Stores, the family moved to Albert Lea in the fall of 1963. Richard later worked for more than 20 years in the Savings and Loan industry beginning with First Federal Savings. He worked hard and passed on to his children a strong work ethic. Having grown up during the Great Depression and WWII, Richard knew hardship and fear, but he also learned the value of family, friendship, and community. Among the many gifts he gave his children, perhaps this is the greatest. Care for the people you love, work hard, and have fun! Richard’s wife Rita always said her children that “Your father is a man who knows no strangers.” This was certainly borne out by his many friends, long-term membership with the Elks Club, as well as memberships with the American Legion and the Eagles Club. As evidence of his active role in the community, Richard was twice made president of United Way campaigns. Yet, it was his many friendships made through working downtown, attending church regularly, attending coffee with fellow retirees, playing cards, and eating out and dancing with mom that connected him with so many people. Richard loved to talk and tell stories as did Rita. Family meals and outings were often highlighted by stories both funny and sad told about family and friends, their childhoods in Pontiac, distant relatives and times long gone by, places the family had lived, experiences they had shared, and their children’s dramas and achievements. The Herwig’s of Albert Lea are a very talkative bunch, and they all know who to blame for it! Richard was a lifelong Presbyterian and active member of the First Presbyterian Church in Albert Lea for 55 years. He attended church every Sunday and was endowed with a deep faith in God. Richard died on Saturday, August 11, 2018—18 months to the day of Rita who died on Saturday, February 11, 2017. He was predeceased by his parents, brothers and sisters, and their spouses, as well as our mom’s parents, brothers, sisters, and spouses with the exception of Rita’s sister Peg (Jobst) and Chuck Studley of Cincinnati, Ohio. Richard and Rita, their parents, many brothers and sisters, and most spouses all lived and grew up in Pontiac. It endowed them and their children with a rich and abiding love of family and place. In addition to Richard’s aforementioned sister-in-law and brother-in-law, he is survived by his six children: Patricia (David) Jensen, Richard Jr (Roxann Synder) Herwig, Mark Herwig, Thomas (Jolyn Thompson) Herwig, Timothy (Kathy) Herwig, and Paul (Jennifer Ilse) Herwig; four grandchildren: Adam, Brittany, Jamie (Tia Janet), and Nathan; as well as by many nieces and nephews. He is also survived by the many friends and acquaintances he made in Albert Lea as an adult and Pontiac when he was a boy. Memorials preferred to the Food Shelf at the First Presbyterian Church or to the donor’s choice.

To order memorial trees or send flowers to the family in memory of Richard Herwig Sr., please visit our flower store.