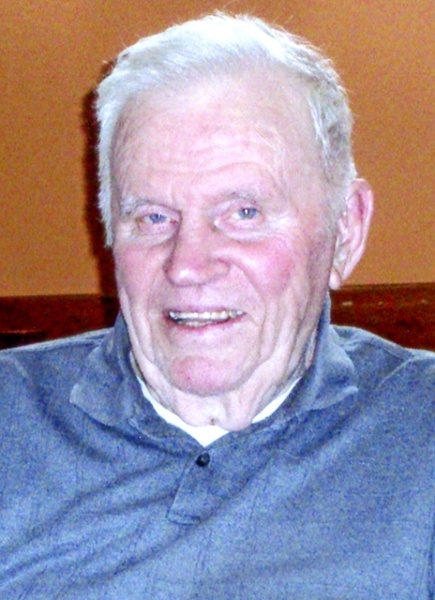 Memorial Services for Raymond F. Riemer of Albert Lea, will be held at 10:30 a.m. on Saturday, Nov. 17 at Ascension Lutheran Church, Albert Lea. The Reverend Mark Boorsma will officiate. Visitation will be at the church one hour before services. Interment will be in Concordia Bear Lake Cemetery in the spring. Ray died on Saturday, November 10 at Good Samaritan Society, Albert Lea. He was 93 years old. He was born on January 8, 1925, in Nunda Township, Minnesota the son of Raymond F. and Inez C. (Hoverson) Riemer. He attended country school and then graduated from Emmons High School. Ray married Julie (Juliann M. Heine) on June 29, 1947, at the Concordia Lutheran Church Pickerel Lake in rural Albert Lea. They were together nearly 64 years, until her death February 15, 2011. He farmed until his marriage and then sold Surge Milking equipment for a short time before beginning his career in carpentry. He worked for various union contractors in the area, spending many years with Hanson Zimney Construction as a construction superintendent. He started Ray Riemer Construction in 1976 and worked there until his retirement. Ray and Julie were members of Ascension Lutheran Church for more than 50 years and were involved in many church activities. Ray enjoyed the church dartball league, and he and Julie enjoyed making lefse for the church’s annual bazaar and for their family. He was often in his shop with woodworking projects for Julie and his kids. Ray was an avid reader of history, especially interested in history of the Civil War, World War I and World War II. In his later years he enjoyed the camaraderie of the Kiwanis Golden K2 Club. Ray is survived by three sons: Bruce R. (Jane) of Albert Lea, Richard A. (Karen) of Minneapolis, and David L. (Shirley) of rural Conger. Also surviving are 6 grandchildren- Christopher (Carla) Riemer of Belle Plaine, Michael (Rebecca)Riemer of Minneapolis, Annie (Dave) Heuer of Roseville, Jessica Riemer of Minneapolis, Katie Riemer of St. Paul, and Elizabeth Riemer of Portland, OR; great grandchildren, Juliann and Justin Riemer and Alice and Louis Riemer. He is also survived by sisters -in -law and brothers-in-law: Delores Riemer of Albert Lea, Marie Nelson of St. Petersburg, FL, Lois Mortenson of Fayetteville, AR, Shirley (Larry) Peterson of St. Joseph, MN, Sandra Heine of Conger MN and several nieces and nephews. He was preceded in death by his wife Juliann, his parents, infant son Bruce Fredrick Riemer, brother Lloyd Riemer, and several sisters- and brothers-in-law. The family extends a sincere thank you to the wonderful staff of the Good Samaritan Society of Albert Lea for the care, love and compassion given to Ray. As a contractor and as a volunteer, Ray was responsible for many construction projects at Ascension Lutheran over the years. In lieu of flowers the family would prefer memorials to the Ascension Lutheran Church Building Improvements Fund.

To order memorial trees or send flowers to the family in memory of Raymond Riemer, please visit our flower store.