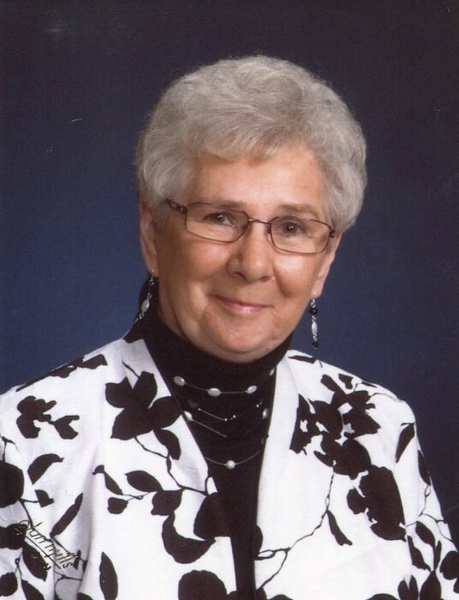 Ramona was born in Rake, IA on January 8, 1931, the daughter of Bert E. and Abbie R. (Rake) Lund.  She graduated from Rake High School in 1949, and attended Luther College in Decorah, IA for one year.  On July 25, 1953, she was united in marriage to Lowell A. Siefken, and together had four daughters:  Kim, Kari, Kelli, and Kathryn.

In 1969, the family left Albert Lea and moved to Logansport, IN for five years.  They later moved to Cherokee, IA, before returning to Albert Lea in 1979.  Throughout her life, she spent time as a dedicated stay at home mother and worked various secretarial positions.

In 1984, Lowell passed away at the age of 51.  Ramona soon found new love with Gordon M. Ramsey, who had been widowed in 1984 as well.  They married December 7, 1985, and she gained two stepsons and three stepdaughters.  The two shared many good times with extended family, and especially delighted in taking overseas trips to Switzerland, Norway, England, France, and Finland. Their last big trip they took together was to Hawaii, with her sister, Avon and husband Darvin.

At home, Ramona enjoyed playing cards with neighbors, friends, and family.  She loved writing poetry, crafting, and decorating/re-decorating the house.   Sewing was a way of life, and her children fondly remember her making their clothes.  To many, she was known as a generous gift-giver, a habit she was passionate about.  She will be remembered as a kind, compassionate, and attentive person who “worried too much” and who believed “cleanliness is next to Godliness”.  She was a devoted member of East Freeborn Lutheran Church and participated in a wide variety of church groups and activities.

She is preceded in death by her parents; her first husband, Lowell Siefken; four brothers: Roy, Wally, Gerald, and Harvey; step-grandchildren, Tye and Anna; and numerous brothers and sisters-in-law.

In lieu of flowers, memorials are preferred to the Alzheimer’s Association, Rake Cemetery Fund, or East Freeborn Lutheran Church.

To order memorial trees or send flowers to the family in memory of Ramona Ramsey, please visit our flower store.