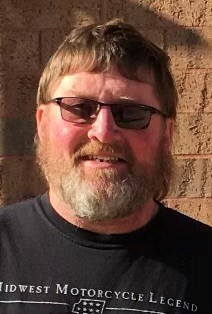 Mike was born May 21, 1961, in Albert Lea, MN to Clarence and Margie (Waalkens) Willaby.  At a young age his family moved to Tecumseh, OK.  Mike attended grade school and high school and later moved back to the Albert Lea area to live with his dad.  Shortly after his move he met the girl next door, Donna Flattum.  They were wed on April 10, 1982, and moved to Emmons, MN where they raised their four sons: Shaun, Joey, Robert, and Troy.  Mike and Donna were happily married for 40 years.

Mike worked at various places in maintenance in the Albert Lea area, most recently at the Holiday Inn Express in Albert Lea.  He lived life to the fullest and enjoyed riding motorcycle, weekend getaways and camping with his wife, Donna.  His free time was often spent tinkering and wrenching on his cars and helping anyone who called and needed a quick fix on their vehicle.  A loyal Vikings fan, Mike loved his team no matter how bad they were.  His biggest pride and joy were his grandkids; he cherished every moment spent with them.

In honor of his Minnesota Vikings loyalty, feel free to wear your Vikings apparel or colors.

To order memorial trees or send flowers to the family in memory of Michael "Mike" Willaby, please visit our flower store.