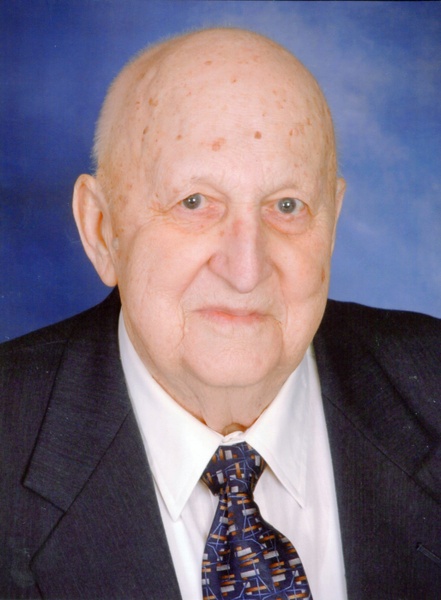 Melvin Ellsworth Mattson was born on September 15th, 1923, at his parents’ home in Mansfield Township, the son of Ludvig and Dora (Yost) Mattson.  He attended School District #74 through 8th grade, and then graduated from Alden High School in 1941.  Melvin worked as a farmer until he retired in 1986, living most of his career on the homeplace that his dad purchased, and where his sons and grandsons farm as a partnership now. Melvin met his wife Gertrude Helland, on September 2, 1941, in Emmons at a main street dance, celebrating the opening of Highway 69.  They were married October 8,1943 and were married for 68 years.  Melvin and Gertrude moved to Thorne Crest Apartments in September of 2011.   Gertrude passed away on May 1, 2012. Melvin was a lifetime member of Bear Lake Concordia Lutheran Church, where he was baptized and confirmed.  He was on the church board, a brotherhood member, church choir, dart ball team, church

council as a secretary and treasurer for many years.  He also served on the elevator board, creamery board and school board.  Melvin’s dad Ludvig was born in Sweden and came to America at the age of 17.  Many of Melvin’s relatives lived in Sweden, so he and his wife visited Sweden nine times.  They also toured other countries in Europe.  Many of these relatives came back to America to visit them also.  They also went to Crane Lake, (their 2nd home) in northern, Minnesota with friends and family for 60 years.  They also visited many places and states in the US. Melvin was a talented woodworker, making many pieces for their home, churches, family, and friends, including the Lord’s Prayer, 23rd Psalm, praying hands, dollhouses, crosses and many other fine things.

Melvin was preceded in death by his parents, Ludvig and Dora, wife Gertrude, sister Arlene, many cousins, and in-laws and Doug Johnson, grandson-in-law.

To order memorial trees or send flowers to the family in memory of Melvin Mattson, please visit our flower store.