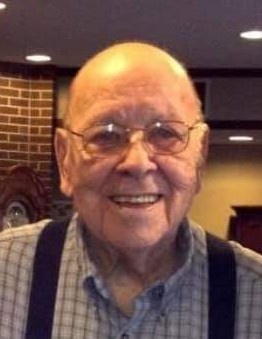 Melvin was born on March 10, 1923 to parents Arthur and Jenny Burnett in LeSueur County. He was raised in Cordova, MN where he attended a country school. At the age of 19 he married the love of his life, Helen Svoboda, on August 19, 1941 in Lexington, MN. He was drafted into the U.S. Army July of 1944 and served in WWII until February 1946. A member of the Army's 3rd Division, he was among the men who waged a months-long assault to breach the Siegfried Line, also known as Hitler's West Wall, helping bring an end to the war.

Melvin worked as a Heavy Equipment Operator for both the City of Albert Lea (10 years) and Freeborn County (23 years). He was a member of the Albert Lea VFW & American Legion. At the age of 91, he enjoyed an honor flight to Washington D.C., where he was able to visit the World War II memorial. His name is listed on the memorial's electronic registry of Americans who contributed to the war effort.

He had his morning coffee hangouts in Albert Lea. Melvin was known for his sense of humor and the way he jokingly teased people. He enjoyed eating sweets, especially donut holes and chocolate ice cream. His generous heart will be dearly missed.

In lieu of flowers, a donation to the charity of your choice in Melvin's honor is appreciated.

To order memorial trees or send flowers to the family in memory of Melvin Burnett, please visit our flower store.