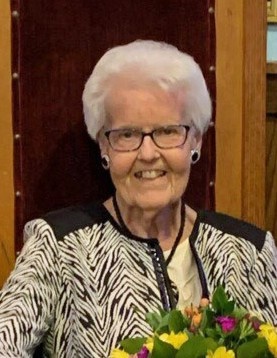 Mary Lou Catherine Borland, formerly of Albert Lea, MN, passed away on Tuesday, December 31, 2019 surrounded by family. She was 85 years old. Funeral Services for Mary Lou will be held at 11:00 A.M. on Tuesday, January 7, 2020 at St. Theodore Catholic Church in Albert Lea.  Father Brian Mulligan will officiate.  Visitation will be held on Monday, January 6, from 5:00 – 7:00 P.M. at Bonnerup Funeral Service, Albert Lea, and again one hour prior to the service at the church.

Mary Lou Borland was born to Edward and Irene (Ramsey) Haas on May 1, 1934. She was raised in Chatfield, MN and graduated from high school there in 1952.  She received a teaching degree from Winona State College in 1954.

Mary Lou met the love of her life, Art Borland, in Blue Earth, and they married on June 14, 1958 in Chatfield.

Mary Lou’s 37-year teaching career started in Blue Earth, moved to Austin for a year and finally settled in Albert Lea; where she taught first or second grade.  Teaching was more than a career for her; she received much joy from watching the progress of her students.  She loved Sibley Elementary School so much that she volunteered in the library for several years after retirement.

Mary Lou enjoyed camping and activities with the Cross Roads Campers Club and spring/summer break road trip vacations with her family.  After retirement, she and Art enjoyed many bus tours and several cruises.

For more than 20 years, they were snowbirds for the winter months, increasing the duration over the years, at their condo in Lake Havasu City Arizona.  There they made many new friends and Mary Lou was the organizer of pot luck parties for every occasion, by the pool whenever possible.

Mary Lou enjoyed hosting coffee parties for groups of friends and family no matter where she called home.  Her banana bread and chocolate chip cookies were famous.  In Albert Lea, she was a member of her neighborhood Birthday Club, bridge club and in later years was a red hat lady and attended retired teacher activities.

After Art passed on, Mary Lou moved to an apartment at St. Therese of New Hope to be closer to her children and grandchildren.  Her granddaughters had always been a major joy and focus in her life, but living closer meant she could be there for all of their special events and achievements, and she’d have another opportunity to brag about them to friends.

Mary Lou was a member of St. Theodore Catholic Church, serving as a Eucharistic minister and singing in the Resurrection Choir.  In the winters, she attended Our Lady of the Lake Catholic Church in Lake Havasu City and when she moved to New Hope loved the chapels at St. Therese.  Her Catholic faith was a joy in her life that sustained her through life’s challenges and was the source of the care and support she shared with many friends when they needed help.   She loved to start each day with mass, and follow that by having coffee and conversation with friends.

Mary Lou’s endless energy, support to others and her genuine enjoyment of life will be missed by those who knew and loved her.

Mary Lou is survived by her two children: Jackie (Jim) Heggernes of Minneapolis and Art (Jan) Borland and their daughters, Ashley and Sidney Borland of Maple Grove; and her sister Edna Kay Hughes of Chatfield.

Mary Lou was preceded in death by her husband Art; her parents; and her sisters, Arladene DeBruin and Genevieve Martin.

To order memorial trees or send flowers to the family in memory of Mary Lou Borland, please visit our flower store.