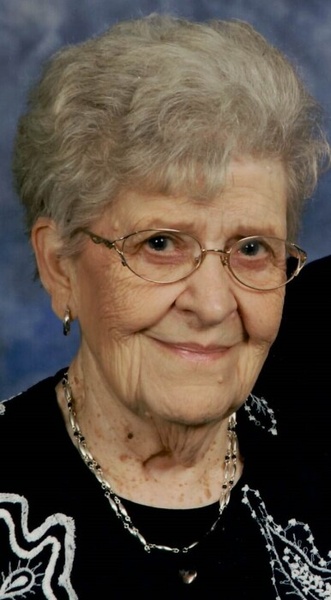 A small private funeral will be held. Burial will take place in the LeSueur River Cemetery. Filming of the service will be uploaded to the funeral home website on Friday, June 26.

Martha was born January 10, 1924 to Yens and Hannah (Anderson) Andersen in Summit Township of Steele County, Minnesota. She was baptized at First Lutheran Church in Ellendale, confirmed at the Grace Lutheran Church of Waseca, and graduated with the class of 1942 from Waseca Central High School.

On January 28, 1943 Martha married Harold Jacobson at Grace Lutheran Church in Waseca and together they raised three children on the family dairy farm.

Martha worked her entire life on the farm, and also spent time working at E.F. Johnson, Ole’s Café in New Richland and the Trucker’s Inn in Ellendale.

Brownies, homemade buns, strawberry jam and fried chicken were some of the wonderful items Martha enjoyed making throughout her life for family and friends. She loved going on fishing trips, shopping and time with her family.

To order memorial trees or send flowers to the family in memory of Martha Jacobson, please visit our flower store.