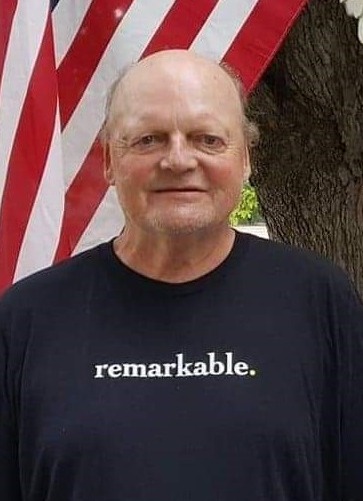 Mark Eugene Christenson, 68, of Hartland, MN passed away peacefully with family by his side on October 23, 2022, at Mayo Clinic Hospital, Methodist Campus in Rochester, MN.

Mark was born on March 14, 1954 to Dale and Joyce (Turner) Christenson in Albert Lea, MN. He attended and graduated from Albert Lea schools. Following his graduation, he entered the workforce. On October 27, 1989 he married his love, Jeanne Kormann, at Cross of Glory Church in Hartland, MN. Together they made Hartland their home where they raised their daughter Tabatha.

Mostly known as a jokester, or as he liked to be called “ReMARKable”, he will always be remembered most for being full of life and the center of attention. He could often be found playing football with the neighborhood kids in his role as the full-time quarterback, enjoyed playing spoons for his friends and family, singing 50’s and old-time country music and making his distinctive train whistle sound that Boxcar Willie would have been jealous of. Mark enjoyed watching the MN Vikings and MN Twins and very rarely missed watching a game. White Birch Campground in Breezy Point, MN was his second home which hosts many memories with his “upnorth” friends at the camper. Mark was also a member of the Sons of the American Legion. Mark was a special man who cared deeply for his family and friends and will be missed by many.

A Celebration of Life Gathering will be held on Monday, November 28, 2022, from 1:00 PM - 4:00 PM at Bonnerup Funeral & Cremation Services in Albert Lea, MN. Interment will be at the Hartland Cemetery; Pastor Marcia Pederson will officiate.  Following the graveside service, family and friends are invited to the social hall at Cross of Glory Church for food and fellowship.

To order memorial trees or send flowers to the family in memory of Mark Eugene Christenson, please visit our flower store.