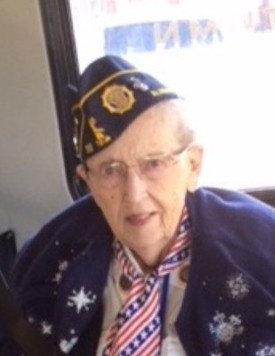 Funeral services for Marjorie Lukecart will be held at 1:00 PM on Sunday, June 16, 2019 at First Presbyterian Church, 308 Water St. Albert Lea, MN 56007.  The Reverend Dwight Netzer will officiate.  Visitation will take place one hour prior to the service.  Burial will be in Graceland Cemetery with military honors provided.

Marjorie Lukecart, who is a WWII Navy Veteran, passed away peacefully on Wednesday, June 5, 2019 in Coon Rapids, MN.  She was 95 years old.

Marjorie (Everson) Lukecart was born in Albert Lea on March 11, 1924 to Lawrence and Ada (Fiene) Everson.  She attended Albert Lea schools, graduating in 1941.  She then attended the University of Minnesota for two and a half years, but left college to enlist in the U.S. Navy.  She served at the U.S. Naval Hospital at St. Albans, Long Island, NY as a Pharmacist’s Mate, Second Class.  While there, she was married to Kenneth Lukecart of Albert Lea who was also in the Navy.

After the war, Marge and Ken returned to Albert Lea to make their home and raise a family.  Marge returned to college at Mankato State in 1952 where she earned a B.S. Degree in education and subsequently taught elementary school in Alden and Albert Lea for 16 years.  She also earned a Master’s Degree in Counseling and then a Specialist Degree in Special Education Administration.  She became the first full time Director of Special Education and Federal Title I Programs in District 241, serving for 14 years and retiring in 1986.

Over the years, Marge was a member of the local, state, and national education associations, the Minnesota Administrators of Special Education, and Phi Delta Kappa honorary fraternity.  She was also a member of AAUW, the League of Women Voters, the Women Veterans of Freeborn County, the Freeborn County Historical and Genealogical Societies, and was an original member of the Albert Lea Community Band, where she played saxophone and solos until age 90!  She also served as a deacon and then an elder of the Presbyterian Church.  Marge also served on several advisory boards over the years including: Alpha School, Woodvale V, Freeborn County Nurses Advisory Board, the United Way, Civic Music, and the Intercultural Education Advisory Board.

Memorials preferred in lieu of flowers to First Presbyterian Church of Albert Lea to support their mission work.

To order memorial trees or send flowers to the family in memory of Marjorie Lukecart, please visit our flower store.