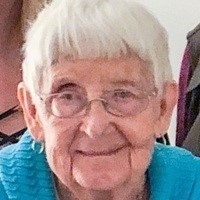 A funeral service for Lois Emma Matthies of Newark, Ohio, formerly of Albert Lea, will be held at 2:00 PM on Saturday, October 19th, at Bonnerup Funeral Home in Albert Lea. Interment will be at Graceland Cemetery. Visitation will be one hour prior to the service. Lois died peacefully on September 23rd in Newark, Ohio. She was 92. Lois was born April 22, 1927, in Walters, Minnesota, the daughter of Erwin and Anna (Steinhauer)Beyer. She was baptized and confirmed in the Faith Lutheran Church in Walters. She attended grade school in Walters, and graduated from Kiester High School in 1945. Lois graduated from Mankato Teachers College and taught the lower grades at the Walters school. She married Ervin H. Matthies at the Faith Lutheran Church on November 26, 1948. In 1949, they moved to Albert Lea. She was a member of Salem Lutheran Church, and active in Lydia Circle. She also was a Sunday school teacher and a Bible school teacher. Lois was also a member of the Lois Club. She enjoyed sewing, baking, crafting, doing counted cross stitch, and spending precious time with her two grandchildren. Lois was preceded in death by her parents, an infant daughter, Julie Ann, and her husband, Ervin in 2011. She is survived by her daughter Emily Larson (Richard), and granddaughter, Ellen Larson, all of Newark, and by grandson, Erik Larson (Colette), and great-grandson, Luke Matthies Larson, all of Edgewood, Kentucky. She is also survived by niece, Bonnie Ballard, of Walla Walla, Washington, and a nephew, Kenneth Borchert of Duluth, Minnesota. Memorial contributions may be made to Salem Lutheran Church in Albert Lea.

To order memorial trees or send flowers to the family in memory of Lois Matthies, please visit our flower store.