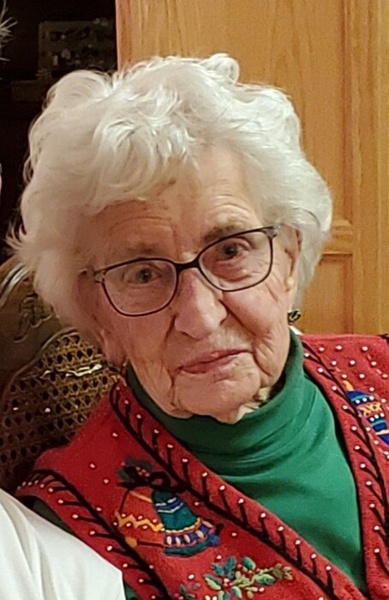 On June 10, Lettie Ann Georgia (Petersen) Anderson passed at the age of 98 – just short of her 99th birthday on June 25.

She graduated from Albert Lea High School in 1941.

Her longest professional tenure was as a clerk at State Bank of Clarks Grove – surviving the often-shared story of the bank robbery of 1981.  Other positions were held at the Albert Lea Public Library, Wallace’s in Albert Lea, Albert Lea Co-op Creamery and Lerdal Telephone Company.

Lettie Ann and Lyle were very active civic and social members of the Clarks Grove community.  She was a charter member of the Clarks Grove Firemen’s Auxiliary having cooked more than her fair share of abelskivers at the annual fundraisers.  They hosted many a card club and other parties.  June Dairy Days held in Clarks Grove were major social calendar events.

Of special note was her Danish pastry baked often to share with friends and family.  She was an award-winning sewer including more than one wedding dress.  Lettie Ann stayed active with many things including bowling, golfing, and travels to California, Arizona, Washington, D.C., and many more destinations – including two trips to the Denmark homeland.  The many, many years of laughter and joy on family vacations in Florida are now especially fond memories.

She is survived by Carl and Nancy Anderson, Eric Anderson, grandchildren Nyla Anderson and Kyle Anderson, and great-grandchildren Camae Anderson (Nyla) and Trey and Logan Anderson (Kyle), sisters Erna Berthelsen (Albert Lea) and Jane (and Carl) Nelson (CA), and many nieces and nephews who recall with great fondness many, many wonderful and memorable times together.

A celebration of life will be held at 10 AM on Thursday, June 17, 2021 at the Bonnerup Funeral Service in Albert Lea.  Visitation will be one hour prior the service at the funeral home.

To order memorial trees or send flowers to the family in memory of Lettie Ann Anderson, please visit our flower store.