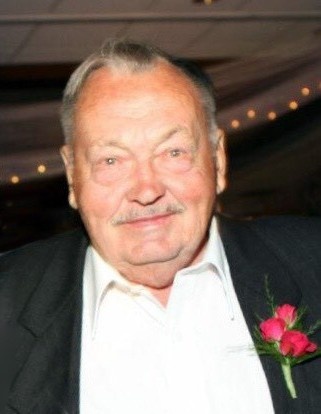 Lerald “Larry” Elbert Farrow, 91, of Blooming Prairie, MN, died peacefully on Christmas Eve, 2019, at New Richland Care Center. Funeral Services will be held at 12:00 p.m. Tuesday, January 7, 2020, at First Lutheran Church, Ellendale, MN. Visitation will begin at 10:00 a.m. and continue until the time of the service. Burial will follow in the Danish Baptist Cemetery in Blooming Prairie, MN.

Larry, the son of Lewis E. Farrow and Anna E. (Miller) Farrow, was born December 26, 1927, in Elmore, MN. He graduated from Freeborn High School in 1945. After, he was married to Lorraine Peterson and they had four children. They then divorced and Larry married LaFaye Muriel (Hegna) Johnson on May 29, 1971, at the First Lutheran Church in Blooming Prairie. He resided in rural Blooming Prairie for 42 years.

Larry served in the US Army during World War II. He played football and built the officer’s club where he put himself to work as the managing bartender. Larry worked for Lysne Construction Co. his whole life. When he retired, he and LaFaye traveled to Texas every winter and enjoyed the warm weather. They would travel to Mexico and all over the United States and enjoyed going on cruises.

He was active in the VFW and enjoyed the camping life, NASCAR races, and golf. Larry’s sense of humor and that twinkle in his eyes will be greatly missed.

Larry was preceded in death by his parents, his brother-in-law, Kenneth Sibilrud, and his grandson, Derek Johnson.

To order memorial trees or send flowers to the family in memory of Lerald Farrow, please visit our flower store.