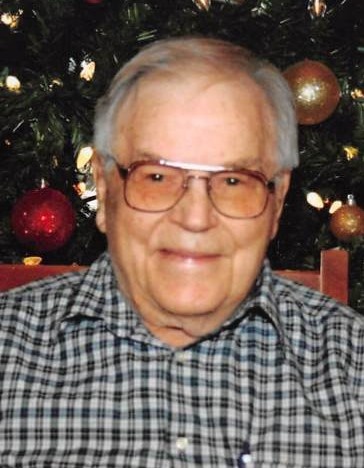 Funeral Services for Kenneth G. Gayken will be held at 11:00 AM on Monday, March 4, 2019 at Bonnerup Funeral Service, Albert Lea, MN.  Pastor Kent Otterman will officiate.  Visitation will take place one hour prior to the service.  Burial will take place in Hillcrest Cemetery.  Military honors will be performed by local veteran organizations.

Kenneth passed away on Wednesday, February 27, 2019 at Hidden Creek Estates, Albert Lea.  He was 96 years old.

Kenneth G. Gayken was born outside of Crystal Lake, IA on June 4, 1922 to John and Else (Attig) Gayken.  At age 4, their house burned down, and they moved to Albert Lea.  In Albert Lea, he was confirmed at Salem Lutheran, was graduated from Albert Lea High School in 1942.  He married Lois (Bonnerup) on April 30, 1944 at Salem Lutheran.  To this union, the couple was blessed with four children.

Kenny served his country in the United States Army from 1945 – 1946, where he spent most of his time at Fort Leavenworth, Kansas.  After his honorable discharge, the family moved to a farm two miles west of Glenville, where he farmed for 30 years.  He also worked at Miami Margarine for several years. He would live at the farm until he moved to Hidden Creek Estates in 2013.

Kenny was an active member at First Lutheran Church in Glenville, where he served on the church council.  He was also a member of the local American Legion and Eagles Club.  Ken enjoyed driving bus for Glenville Schools for 9 years.  When he wasn’t volunteering or working, Ken enjoyed dancing, bingo, reading books, working on old tractors, and most importantly, time spent with his family.

The family would like to thank all the staff at Hidden Creek Estates, Pastor Kent Otterman, and St. Croix Hospice for their loving and wonderful care they gave to Ken.

Kenny will be greatly missed by family and friends.  Blessed be his memory!

To order memorial trees or send flowers to the family in memory of Kenneth "Kenny" Gayken, please visit our flower store.