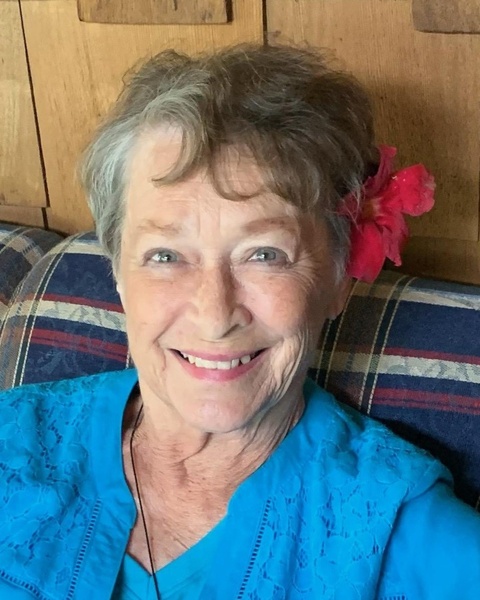 Kay Joanne (Carlsen) Goodmanson triumphed over Alzheimer’s on 10/9/2022 at Thorne Crest Memory Care unit and is no longer confined by the disease’s symptoms and her spirt is now free.  In 2019, Kay was diagnosed with Pancreatic Cancer and Kay displayed her indomitable spirit and unending positivity during her battle with pancreatic cancer leaving this earth cancer free.

Kay was born on March 27, 1945  in Akron, OH to James R. “Bob” and Alice Carlsen.  The family moved to Albert Lea, MN and Albert Lea was where Kay called home for most of her life.  She met the love of her life, John O. Goodmanson, in her neighborhood when she was five years old.  She and John began dating in the 9th grade and were together until his death in 2009. We rejoice that they are now together again.

Kay graduated from ALHS in 1963 and attended St. Barnabas Hospital school of Nursing in Minneapolis, MN, graduating in 1966.  John and Kay were married immediately after her graduation and she worked at St. Olaf college as a nurse while John finished college.  She then worked as an RN for the University of Minnesota hospital for a few years, Naeve hospital and finally spent most of her career with Throne Crest. After Kay’s retirement from Thorne Crest, she decided she still wanted to be a part of the work force and she worked for Sterling and Fisher’s  Jewelry.  Her most favorite role in life was “Grandma”.

Kay never met a stranger. She enjoyed conversations with everyone and always had a welcoming smile and twinkle in her eyes.  She spent many years volunteering with multiple local organizations, and it would take an entire page to list them all.  Her time spent volunteering gave her purpose and she was immensely proud of each organization.

Kay is preceded in death by her husband, John, and her parents Bob and Alice Carlsen.  She is survived by one brother James Carlsen of Rochester, MN; her children, Stacey (Chris) of Naperville, IL and Phillip (Cassie Matthes) of Albert Lea, MN; her grandchildren Allison, Emily, Alex, Olivia and Kennady; best friends, Bob and Vicki Severson; and many other wonderful friends and relatives.

Private services will be held and interment will be at Graceland Cemetery, Albert Lea, MN.  Stacey and Phil invite anyone wishing to help remember Kay to join them for the 2023 Walk to End Alzheimer’s walk (date TBD).  We will have a team walk to remember Kay.  In lieu of flowers, please consider being part of our team for the Walk to End Alzheimer’s in 2023, a donation to ALZ.org, St. Croix Hospice or the American Cancer Society.

To order memorial trees or send flowers to the family in memory of Kay Joanne Goodmanson, please visit our flower store.