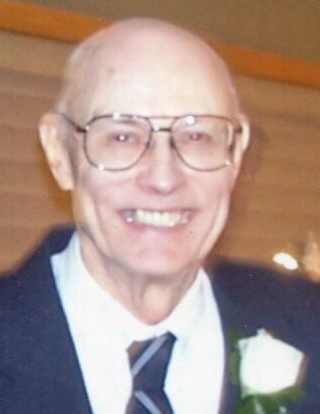 John Ethan Light passed away peacefully on February 20, 2022, at Prairie Senior Cottages in Albert Lea surrounded by his wife, Ginny, and daughters Cindy and Cheryl.

John was born on Nov. 8, 1933, to Ethan A. and Mary Jane (Rich) Light on the Sewerks Farm north of Burt, IA. While living on this farm, John and many of his family came down with scarlet fever but they all recovered eventually. John attended a country schoolhouse in his early school years. He also told many stories of raising steers and showing them in the county fair through 4-H. His family moved frequently during his childhood since his father, Ethan, farmed in northern Iowa to support the family. In 1949, Ethan and Jane purchased a farm outside of Emmons and John finished high school in Emmons in 1951. During his growing up years, he helped on the farm. He became a Christian as a youth. He was baptized in a private service at the Old United Methodist Church on the corner of Washington Avenue and College Street in Albert Lea on April 7, 1947, along with his mother, sisters, brother, and nephew Glen. John attended Lime Creek Church on the Iowa/Minnesota State Line Road after they moved to the Emmons area. The country schoolhouse and the Lime Creek Church were both moved to Farming of Yesteryear near Keister.

John began working at Queen Stoves in Albert Lea in 1952. His brother, Dale, had gotten a job there but was in a car accident right before he was to begin the job. John went in person to tell the manager that his brother would not be able to start the job immediately due to injuries he had received in the accident. John asked to fill in for his brother and management agreed. John worked at Queen Stoves, which became Scotsman for the next 43 years. He started in the factory and worked his way up to becoming a Traffic Manager for the company. At the time of his retirement, he had worked longer than any other employee of Scotsman.

He was married to Donna Eisenbise Light on Oct. 25, 1953, at Salem Lutheran Church, Albert Lea. To this marriage four children were born: Cindy, Rick, Alan, & Cheryl. They were able to celebrate 50 years of marriage. Following his growing up years, he lived in Albert Lea most of his life except for seven years when he and Donna relocated to Vernon Hills, IL to continue his employment with Scotsman when the company moved out of Albert Lea to the Chicago area. John and the family traveled extensively all over the U.S. and took in the World’s Fair in New York, Montreal, Spokane. Also, for many years, John was a member of Toastmasters to improve his communication and leadership skills. For his job at Scotsman, John traveled extensively in the United States and Italy. While living in Vernon Hills, John and Donna were active members of Christ Lutheran Church and served in many capacities. John retired in 1995. That same year, they moved back to Albert Lea.

After retirement, they spent part of the winter in the South. In 1978, they took John’s mother to London, England, and toured places that John’s Light (Lyte) relatives lived. John and Donna became members of Crossroads Evangelical Free Church by profession of faith in 2003. He was a person who would help anyone who needed help and was quick to grab his toolkit and fix things that needed to be fixed. John volunteered for Habitat for Humanity after Donna died. He returned again to England with other family members in 2006.

On January 4, 2014, at age 80, John married Virginia Thompson (Ginny). Ginny brought love and renewed joy into John’s life. John was a Christian and had a strong faith that guided and comforted him throughout his life and had known Ginny as a devoted Christian for many years. He and Ginny continued to worship at Crossroads Evangelical Free Church and worked together for several years as leaders of a grief share group there. He loved supporting the ministry in many ways and volunteered his time to care for the property, greeting and ushering, and socializing with other members and worshipers. Ginny and John were lovingly devoted to each other and enjoyed visiting with family and friends. He also enjoyed music, reading his bible, watching and discussing sports, taking care of his yard, feeding, and watching wild birds, visiting with family and friends and playing cards (he was quite the card player). He especially enjoyed his grandchildren and great grandchildren.

During the last three years of John’s life, he was diagnosed with dementia. Ginny cared for him at home until Feb 2021 and then received care at Prairie Senior Cottages in Albert Lea until his death. His family is appreciative of the care he received when they could not be present. He was especially fond of the tasty meals and friendly staff.

In lieu of flowers, memorials can be donated to the following: Youth for Christ (The Rock), Prairie River Camp, & St. Croix Hospice.

A celebration of John’s life will take place at 11:00 a.m. on Saturday, April 2, 2022 at Bonnerup Funeral Service.  Time for visiting with family will be held one hour prior to services.  Interment will follow lunch at Graceland Cemetery.

To order memorial trees or send flowers to the family in memory of John Light, please visit our flower store.