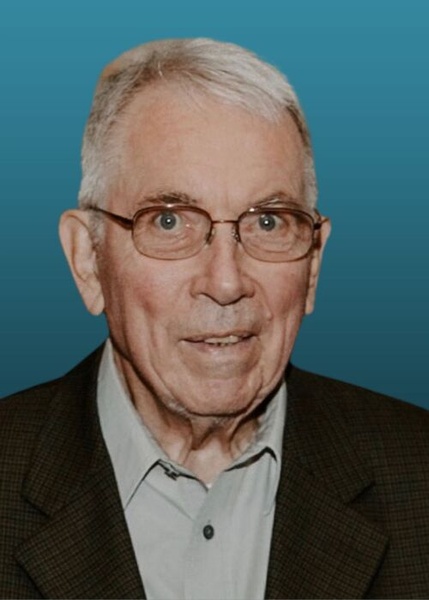 John was born on September 28, 1934 in Whittemore, IA, the son of William and Arela (Rusch) Leininger.  He was baptized at St. Paul’s Lutheran Church in Whittemore on October 28, 1934 and was confirmed at the same church in 1948.  After he graduated from Whittemore high school, he was drafted into the United States Army and served our country from 1957 to 1959.

On June 20, 1958, John married Charlotte P. Meier at St. Paul’s, and the two had four children: Steven, Philip, Jayne, and Julie.  In 1959, they made Albert Lea their home.  John worked at Queen Stove’s for short time and for thirty-seven years at Streater’s as an inventory controller.  After retirement, he helped deliver flowers for Ben’s Floral and volunteered for Meals on Wheels delivery.

John was an avid cribbage player and spent his lunch hours playing with his co-workers.  He loved card games, gardening, golfing, bowling, Evangelism, and spending time with his grandchildren.  John was an active member of the Zion Lutheran Church in Albert Lea, where he taught Sunday School and served as an Elder.

A  public drive through visitation will take place at Bonnerup Funeral Service in Albert Lea from 11:00 a.m. until 1:00 p.m. on Monday, September 7, 2020.  Private family services will be held, and interment will be in Graceland Cemetery in Albert Lea.

To order memorial trees or send flowers to the family in memory of John Leininger, please visit our flower store.