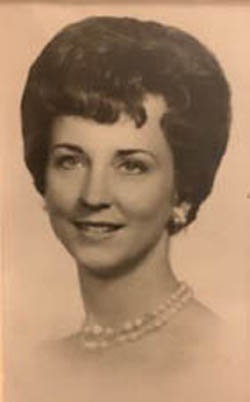 Funeral Services for Joanne Linder, former Albert Lea resident, will be held at 10:30 A.M. on Monday, September 16, at St. Theodore Catholic Church in Albert Lea. The Reverend Kurt Farrell will officiate. Interment will be in St. Theodore Cemetery. Visitation will be one hour before services at the church.

Joanne passed away peacefully on Tuesday, September 10, in Lenexa, Kansas. She was 86. She was born to Helen and Lester Bugher on January 8, 1933 in Omaha, NE. Joanne attended St. Mary’s nursing school where she became a nurse and spent her entire life helping others. Joanne worked at Thorne Crest Nursing Home in Albert Lea for many years. She was a member of St. Theodores Catholic Church of Albert Lea, where she was always active. Joanne was proceeded in death by her husband of 45 years, Peter Linder.

She is survived by her daughter, Dianne Syrvalin, husband David, and grandsons Carter and Sawyer of Williamsburg, Virginia, as well as her son Peter, wife Rhonda, and grandchildren Peyton, Avery and Owen of Chanhassen, MN. Peter and Joanne retired to Mountain Home, Arkansas, where they lived until moving to Gardner, KS in 2009. She always enjoyed gardening, playing cards, and spending time with her grandchildren. Joanne was a very active where she lived, sharing various activities with the residents around her The Linder family would like to extend a special thanks to the entire staff at Delmar Gardens in Lenexa KS for taking care of Joanne for the past several years.

To order memorial trees or send flowers to the family in memory of Joanne Linder, please visit our flower store.