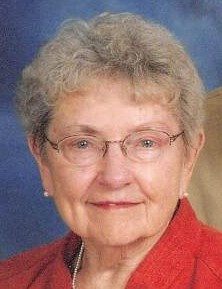 Joan was born April 9, 1933 in Aberdeen, SD, the daughter of James and Lily (Jones) Cogley.  She graduated from Aberdeen High School, and then attended and graduated from Presentation School of Nursing.  She became a registered nurse, a career which spanned 42 years, starting her employment at Community Hospital in Hettinger, ND, and then later working at St. Francis in La Crosse, WI.

On January 10, 1959 in La Crosse, WI, Joan married Patrick Sullivan, the love of her life.  The young newlyweds moved to Albert Lea later that year where they raised a family of five children.  She worked as a registered nurse for Naeve Hospital, Saint John’s Nursing Home, Fountain Lake Treatment Center, and Mayo Hospital Albert Lea.

Joan belonged to the Saint Theodore Rosary Society, Naeve Nurses Society, Study Parish Nurse Team, and was a 4-H and Cub Scout Leader.  She volunteered at church helping with funerals and delivering communion.  She led tours of Naeve Hospital for elementary school students.  She enjoyed playing bridge, knitting, sewing, baking, and traveling to Ireland.  Her family came first, and she especially enjoyed the yearly vacation at Round Bay on Third Crow Wing Lake.

Preceding her in death were her parents; her brother and sister-in-law, John and Enid Cogley; her sisters and brothers-in-law: Ann and Richard Russell, Ellen and Ward Hisman, and Dorothy and Carl Wendt; sister, Gertrude Rodrick; and brother-in-law, Jack Holzer.

In lieu of flowers, the family requests donations to the charity of your choice, Presentation College School of Nursing in Aberdeen, SD, or St. Theodore’s Catholic School.

To order memorial trees or send flowers to the family in memory of Joan Sullivan, please visit our flower store.