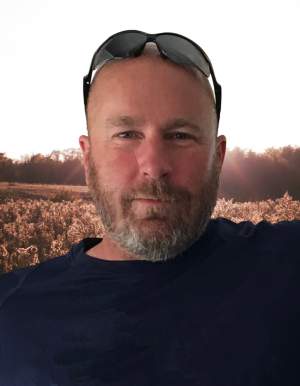 James "Jim" Jensen was born on March 16, 1968 in Albert Lea, MN the second son of Jerry and Sharon Jensen.  Jim grew up in the village of Lerdal, with his parents and two brothers,  Tom and Rob.  Jim attended and graduated from Albert Lea High School in 1986.  He was active in the Riceland 4-H Club and several junior high and high school activities.

He entered Austin Community College in the fall of 1986 until given the opportunity to travel to Australia to the Victoria Territory with the assistance of Mark Proeschel, the Albert Lea Family Y Director.  Jim spent three months in Australia working at a local YMCA and traveling the country.

Shortly after earning his degree, Jim began working for Steve Ladlie and the Agri-Growth Research Company in Hollandale, MN.  This was also when Jim started his “sports career”, playing softball for the Aragon Bar and competing in countless pool tournament around the area for over a decade.  Jim always enjoyed “wetting a line” with his good buddies Todd and Pat on Mille Lacs and Leech Lakes , playing pull tabs and cribbage with his friends.  Jim was also a member of the Clarks Grove Fire Department for 11 years.  He continued to be the “Head Pancake Flipper” at the fund raising events for many years after.

In the spring of 1998, Jim and Jon Warnke started Warnke Research Company in Geneva, MN.   Jon and Jim worked together for 24 years in the field of agriculture testing and research.

In the summer of 2002, Jim began to focus on one of his lifelong dreams - to own and operate a Bar and Grill.  Over the next several months, Jim, his family and countless friends worked towards his dream.  Buying the old Ken and Elsie’s gas stations, then owned by Larry and Babe Enderson, the remodeling began along with a strong campaign within the town of Clarks Grove to approve the first ever on-sale liquor license.  On November 5, 2002, by a vote of 222 to 180, the proposition passed and Jim was granted the very first liquor license in the City of Clarks Grove.  With that, the Bull Dog Bar and Grill was off and running.  Jim could always be found in the kitchen making “pub fare” for his faithful friends and customers.

Jim was a loving son, a loyal and dedicated brother and uncle, and the most true and faithful friend to countless people.

Jim is survived by his parents, Jerry and Sharon Jensen of Lerdal; brothers, Tom, and his wife, Judy Jensen, Rob, and his wife, Lisa Jensen of Clarks Grove; nieces and nephews Rachel Jensen, and her fiancée, Kyle Augustine, Samuel Jensen, Aiden Jensen and Zoie Jensen; dear friends, Pat Wilder, Todd and Jana Stadheim, Robert and Janel Heideman, Kajsa and Isaac Sorenson and Steve Monson; along with countless others.  Last but not least his partner in crime, Epic Fredrick of Geneva Lake, his bulldog.

Memorials are preferred to Jim’s family.

A Celebration of Life will be held on Tuesday, June 7, 2022, at 5PM at Bonnerup Funeral & Cremation Services, in Albert Lea. The family will receive friends from 3-5PM at the funeral home.

Keeping with Jim’s wishes, please join family and friends at the Geneva Bar & Grill following the service to share your memories.

To order memorial trees or send flowers to the family in memory of James Jensen, please visit our flower store.