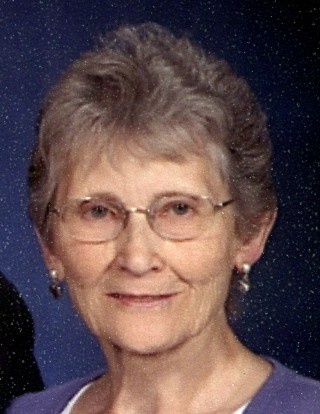 Irene V. Goskeson, age 84, passed away peacefully on October 4, 2018 at her home in Albert Lea, MN. A memorial service for Irene will be held at 11:00 A.M. Monday, October 8, 2018 at Central Freeborn Lutheran Church, rural Albert Lea. Visitation will be held from 2:00 until 4:00 p.m. Sunday, October 7 at Bonnerup Funeral Service, 2210 E Main, Albert Lea and again one hour prior to the service at church. Interment will be in Central Freeborn Cemetery.

Irene Verlaine Olson was born on April 18, 1934 to parents Marvin and Ethel (Romsdahl) Olson in Watonwan County, Minnesota. She graduated from St. James High School in 1952 and went on to Sioux Valley Hospital School of Nursing, becoming an R.N. in 1955. She held various nursing positions at Trimont Community Hospital, Windom Area Hospital, and Estherville Iowa Hospital.

Irene started working for the American Red Cross as a blood mobile nurse. She met her husband-to-be, Orville Goskeson, at a blood drive. The two were married on January 18, 1974 at Long Lake Lutheran Church, St. James, MN, and enjoyed 44 years of marriage together.

They made their home in Albert Lea, where Irene became a licensed day care provider, taught piano lessons, and was the organist at Central Freeborn Lutheran Church for 41 years. Irene was also a home health nurse for many years. She was active with Senior Resources and volunteered for SEMCAC and distributed meals.

Irene and Orville had a love of music, playing in the “Bluegrass Family Band” and playing gigs on their own as well for over 20 years. Irene was very musically talented and able to play a wide variety of instruments.

Memorials preferred to Mayo Hospice in Albert Lea or Central Freeborn Lutheran Church. Special thank you to the hospice workers and Terri Green for the excellent care they gave Irene at the end of her life.

To order memorial trees or send flowers to the family in memory of Irene Goskeson, please visit our flower store.