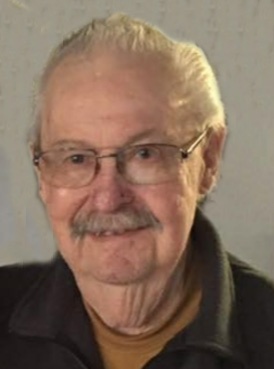 Memorial Services for Harold Weitzel of Albert Lea,  will be held at 10:00 A.M. on Saturday, July 7,  at the First Lutheran Church in Albert Lea.  The Reverend John Holt will officiate.  Interment will be in Hillcrest Cemetery. Friends may visit with family one hour before services at the church. Harold died on Monday, June 25, 2018 at Mayo Clinic Health System, Albert Lea.  He was 89. Harold was born on March 30, 1929, in Frost, Minnesota the son of Henry and Katherine (Strackbein) Weitzel.  He attended school in Wells, MN, and as a young man moved to the Red Wing area where he worked at a bakery.  He transferred to a bakery in Albert Lea and met and married Norreen Dahl in 1946.  They started their family in 1948. Harold started his own roofing company, Weitzel Roofing,  retiring after more than 50 years.  He worked hard to build his business and took much pride in the fact his children will continue with the same quality and diligence he did. In earlier years Harold and Norreen enjoyed dancing.  Perfectionist that he was, he took much pride in restoring classic cars and going to antique car shows. Harold liked to tell jokes and will be remembered as a great storyteller. He is survived by children:  Carol Weitzel Trish of Chanhassen, MN, Steve (Cynthia) Weitzel of Albert Lea, Mitchell (Rhonda) Weitzel of Zumbrota, MN, Kevin (Denise) Weitzel of Glenville, Annette Weitzel (Lan)Camacho of Albert Lea and Troy David Weitzel of Albert Lea; 11 grandchildren, 15 great grandchildren, brother-in-law Ronald Siblerud of Hartland, MN, sister-in-law Verla Weitzel of Blue Earth, many nieces and nephews,  and  friend and companion Judy Palmateer. He was preceded in death by his parents, his son Daniel in infancy, his wife Norreen,  his wife Lael, and many brothers and sisters.

To order memorial trees or send flowers to the family in memory of Harold Weitzel, please visit our flower store.