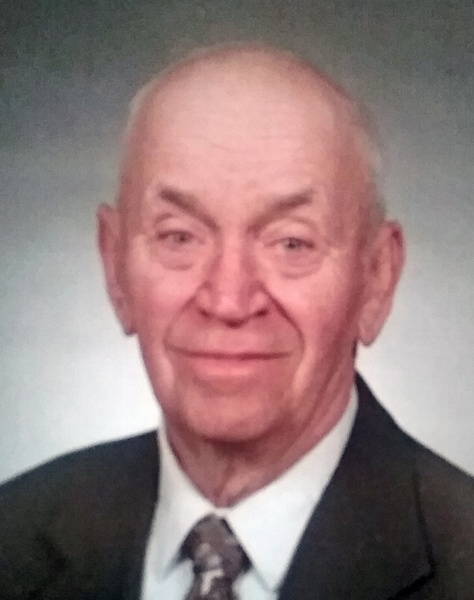 Harold was born October 3, 1931, on the family farm by Conger, MN to Christ and Marie (Ficken) Ohm. He lived on that farm for most of his 90 years. He served his country for 2 years in the Army as part of Project Vanguard in Quito, Ecuador tracking the very first Russian satellite. Upon completion of his service, he returned home to the farm to live until recently when he moved to Albert Lea, living with his daughter, and then moving to PSC.

On October 21, 1966, he was united in marriage to Mary Scrabeck. Harold was a lifelong farmer, retiring at the age of 83, he loved the farm and everything about it. He also enjoyed vacations with his family and old-time country music concerts with Mary. He was a lifelong member of Concordia Lutheran Church, serving in several capacities, including Sunday school treasurer, head usher and benevolence treasurer. His faith was very important to him. Harold was a quick wit and liked a good laugh.

The funeral service for Harold will be held at 11:00 a.m. on Saturday, April 30, 2022, at Concordia Lutheran Church of Pickerel Lake with Reverend Kristi Mitchell presiding. A visitation will be held on Friday, April 29, at Bonnerup Funeral Home from 5:00 - 7:00 p.m. and will continue at the church on Saturday from 10:00 a.m. until the time of service.

Burial will be held in Concordia Lutheran Cemetery in Albert Lea, MN.

To order memorial trees or send flowers to the family in memory of Harold Ohm, please visit our flower store.