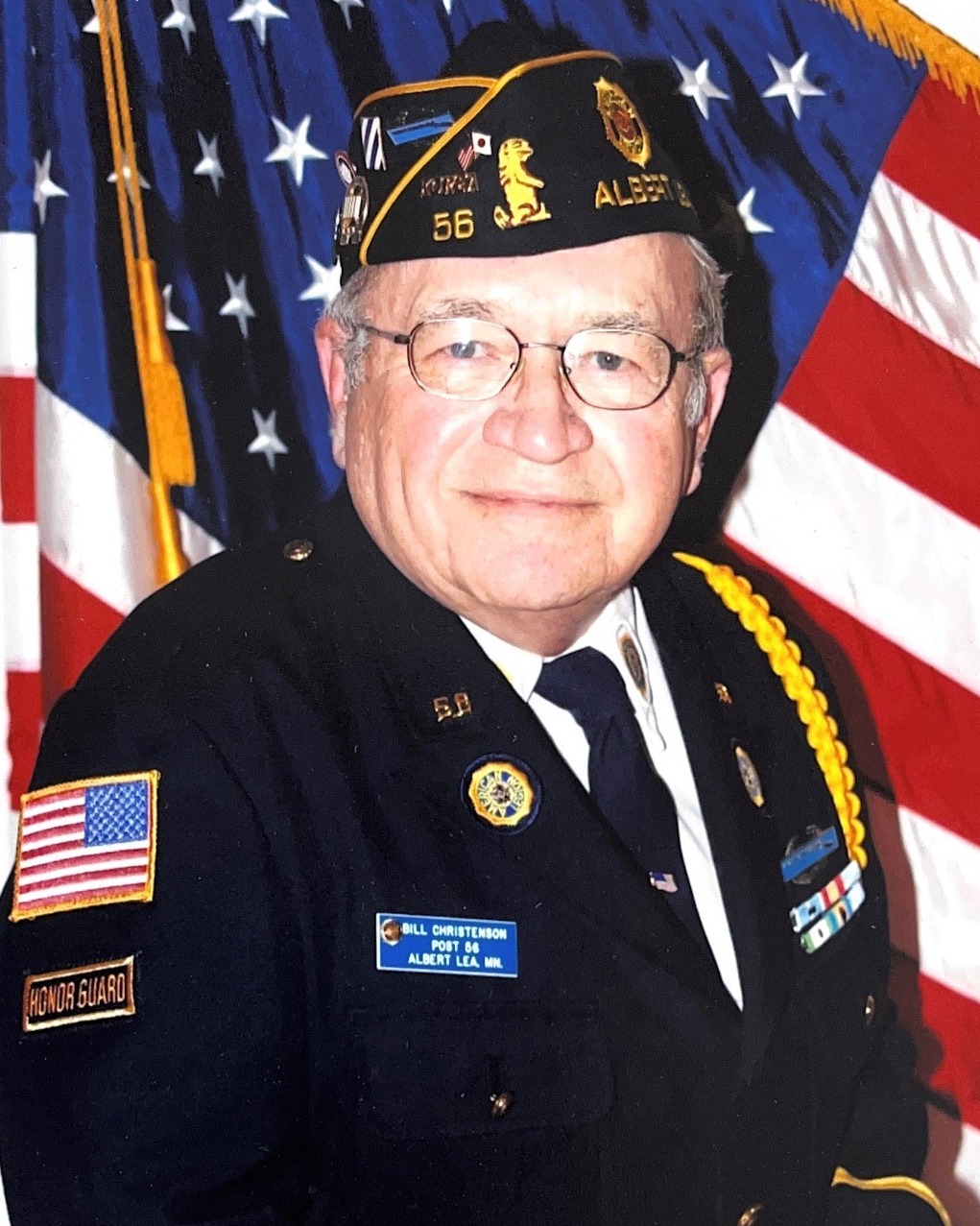 Born on March 11, 1930, in Manchester Township, MN, he was the son of the late William and Olive (Hunsley) Christenson. He was a graduate of Albert Lea High School in 1947. In 1948, Billy enlisted in the Army National Guard. He was later deployed to Korea as part of the 3rd Infantry Division, 7th Regiment, Company A. His rank and job was Platoon Sergeant in the United States Army. Following his deployment to Korea, Billy returned to Albert Lea and was united in marriage to Lavonne (Christensen) Christenson. Billy and Lavonne married on July 6, 1952 at First Lutheran Church in Albert Lea. Together they shared nearly 70 years of marriage and raised four children: Debra, Jodi, Gina and Thomas.

Well-known in the Albert Lea community, Billy worked for the Albert Lea School District as a bus driver. He then worked as a bartender and assistant manager of the Albert Lea American Legion Post #56. In retirement, he was a tireless volunteer. As part of the American Legion’s Honor Guard, Billy was able to provide military honors for more than one thousand veterans and their families. He was named “Legioneer of the Year” twice, most recently in 2018. Billy’s commitment to his fellow soldiers never ended. For many years, he volunteered to place flags at the graves of veterans on Memorial Day and dedicated his Wednesday nights volunteering to lead the Legion’s Bar Bingo.

A dedicated father and devoted husband, Billy enjoyed spending time with family.  They enjoyed vacations “Up North”, trips to Michigan to see family and gambling adventures to Las Vegas. Family gatherings always included a fun game of Huckley Buck and poker. His free time also included playing cribbage and cards with his buddies daily at the Legion. Billy served as a role model to his fellow veterans and community. He visited Korea twice in honor of the 40th and 50th anniversaries of the Korean War.  Billy and his son Tom also traveled to Washington D.C. as passengers of the Twin Cities Honor Flight.

In addition to his parents, William and Olive, Billy was preceded in death by his wife, Lavonne; his daughter, Debbie Delgado; his sister, Evelyn Olson; and son-in-law, Kevin Posivio.

A funeral service will be held at 1:00PM on Monday, January 16, 2023, followed by military honors at First Lutheran Church in Albert Lea. The family will receive friends for a visitation beginning at 11:30AM at the church. Interment will follow at Graceland Cemetery.

To order memorial trees or send flowers to the family in memory of Harold "Billy" Christenson, please visit our flower store.