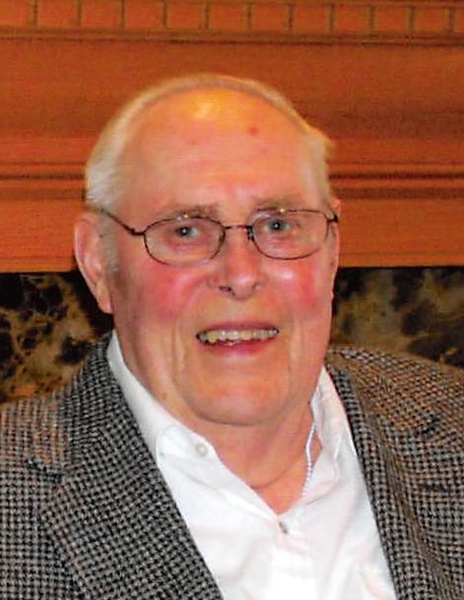 Funeral services for Gilmore “Gil” L. Nelson of Ellendale, MN, will be held at 11:00 AM Thursday, August 15, 2019 at the First Lutheran Church in Ellendale. Pastor Richard Sliper will officiate. Visitation will be held Wednesday evening from 5 until 8 PM at the Bonnerup Funeral Service in Ellendale and one hour prior to the service at the church. Interment will be in the First Lutheran Cemetery. Military honors will be accorded. Gil died Thursday, August 8, 2019 at St John’s Lutheran Home in albert Lea, MN. He was 92 years of age. Gil was born September 24, 1926 in Clarks Grove, MN, the son of Arnold and Hilda (Sorenson) Nelson. He was a graduate of Ellendale High School in 1944. Gil proudly served his country in the US Army. On October 24, 1953 he was united in marriage to Clarine “Kay” Hovland in Lime Creek Lutheran Church. Gil had been employed as a Milkman for Nelson Dairy, Thompson Dairy, Polly Meadows and Marigold Dairy. He was custodian for the Ellendale Public Schools for 20 years, bus driver for 32 years and Funeral Assistant and grounds keeper for Bonnerup Funeral Service for over 30 years. Gil was a member of the Ellendale American Legion and a volunteer fireman for Ellendale for 35 years. He was an honorary life member of the Minnesota State Fire Dept. Association. Gil was an active member of the First Lutheran Church and served on the Church Council. Gil played Baseball, Football and Basketball in high school winning the state championship in Baseball his senior year. He was in Bowling League, card club, enjoyed woodworking, playing bingo and watching all Minnesota Pro Sports. Gil is survived by his children Sheila White of Ellendale, MN, Gary (Debra) Nelson of Clara City, MN, Brenda (Randy) Dokken of Albert Lea, MN, seven grandchildren; Herb (Lori) Moon, Tiffany (Josh) Krueger, Joe (Mandy) Moon, Brock (Heather) Nelson, Geoffrey Nelson, Johnny White and Holly Bates. Ten great grandchildren include; Ava, Jayda, Owen, Mikala, Graysen, Addie Jo, Bryson, Meagan, Maddie and Ashton, many nieces and nephews, and one sister-in-law Dorothy Towne of Emmons, MN. He was preceded in death by his parents, wife Kay in 2016, son-in-law Greg White, Father-in-law Knut and Clara Hovland, and brothers Lloyd and his wife Bernice Nelson, Clayton and his wife Audrienne Nelson, in-laws Ervin Hovland, Earl Towne, Mavis and Donald Bartsch. A special thank you to the staff at St John’s Woodlands and the Mayo Hospice Albert Lea for their care and compassion given to Gil, also to Pastor Richard Sliper for his visits and prayers to Gil and his family.

To order memorial trees or send flowers to the family in memory of Gilmore Nelson, please visit our flower store.