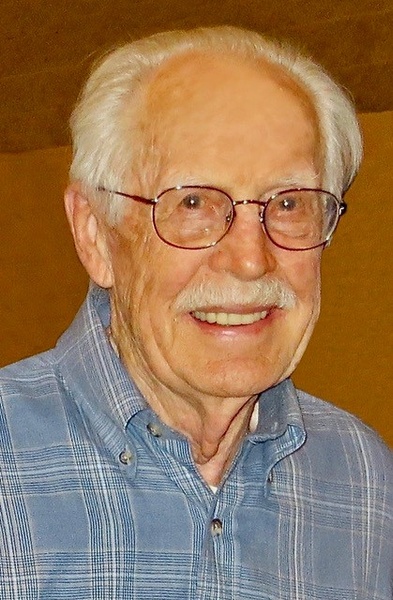 Floyd M. Christensen, age 97 March 25, 1921 – February 19, 2019 Funeral services for Floyd M. Christensen will be held on Friday, March 1st at Assemblies of God Church in Albert Lea. Visitation will be at the church at 10:00 am, followed by the service at 11:00. Following the service a military salute will take place at the church provided by the Albert Lea Veterans Organization. A light lunch will be provided following that. Pastors Ryan Quigley and Loren Molskness will officiate. Interment will be at Hillcrest Cemetery, Albert Lea following the service. Floyd was born on March 25, 1921 to Raymond and Polly Christensen in Albert Lea. He graduated from Albert Lea High School in 1939, attended the local junior college, and soon began working for the Benson Optical Co. In 1942 he was united in marriage to Marjorie M. Borland and enlisted in the U.S. Army during WWII. He served for over three years in Italy and Northern Africa before returning home to start a family. He built his own home (with some help) on Wedgewood Drive and he and Marjorie lived there together for 68 years of marriage. After his return from military service Floyd returned to work at the Benson Optical Company in Albert Lea where he served as an optician and also became certified in contact lenses and hearing aides. Floyd retired from Benson’s in 1984 after 44 years of service. Floyd very much enjoyed gardening and caring for his one acre lot, which he kept up immaculately until age 95. In his later years he very much appreciated the help of his grandsons and sons-in-law in the care of the house and yard. Floyd was an avid camper and fisherman; referred to as the “Fish Whisperer” by his children and grandchildren. He and Marjorie enjoyed spending time camping and fishing at Scenic State Park in northern Minnesota for many years. Floyd was also an excellent carpenter, amateur photographer, and wood crafter and created many useful and treasured pieces of furniture and household improvements at the requests of his three daughters. He leaves a wonderful legacy of expertly crafted furniture his family will cherish, as well as precious memories of many camping and fishing trips in Minnesota and other states. Floyd was a kind, devoted and loving Christian husband, father, and grandfather. He will be greatly missed by his daughters and sons-in-law; Dr. Jane Christensen, Nancy and Phil Duea, and John Newton. Floyd is also survived by his seven grandchildren: Brooke Duea, Jeffrey and Mallory Duea (great grand daughter expected in April), Timothy Duea, David Duea, Peter Duea, Jennifer Swift, and Bill Newton. He is also survived by nieces and nephews Ove and Dan (Barb) Thompson, John Weeks, Ann Englund, Bill (June) Weeks, and Jim (Pam) Weeks. Floyd was preceded in death by his wife of 68 years, Marjorie in 2010, daughter Mary Newton in 2019, sister Opal (Charles Thompson) Harms, parents Ray and Polly Christensen, uncle Harry (Martha) Christensen, sister-in-law Verna (Kenny) Weeks, brother-in-law Dr.Verl (Muriel) Borland, nephew Richard Weeks, and many other aunts, uncles and cousins.

To order memorial trees or send flowers to the family in memory of Floyd Christensen, please visit our flower store.