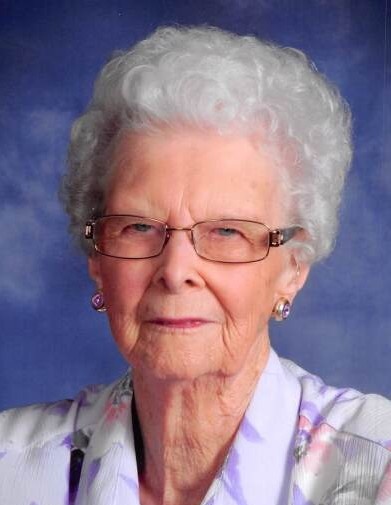 Ethel Lorraine (Tufte) Underland, one month shy of her 96th birthday, passed away peacefully on Saturday, December 4, 2021.  She spent her last weekend (Thanksgiving) with her entire family.  Throughout her life she made lefse hundreds of times, last weekend she had the opportunity to “help” her grandchildren make it once more.  They will cherish the memory of her “supervising” this final time.  She spent a few hours napping in her big recliner during the commercials of her favorite TV shows, and watched her beloved church service, Peace and Power, one last time on Sunday.

Born on January 3, 1926, in Riceland Twp of Freeborn County in Minnesota.  Ethel was the second of 4 children born to Arthur and Edna (Hyland) Tufte.   Spending her formative years in the middle of the Great Depression, she became very focused and driven to succeed financially.  She fudged her age by six months so she could get a job at Wilson Meat packing plant when she was 17.  Her original goal was to earn enough money to buy a car, and after she accomplished that she became a consummate saver, which allowed her to retire early when Wilson closed in the early 1980s. Her 39 years of cutting meat took its toll on her hands, arms and shoulders, which were painfully filled with Rheumatoid Arthritis in her final years.

She attended the Albert Lea schools thru her high school graduation in 1943, right towards the end of WWII.  She married Ordell Ordean Underland on October 7, 1950, and started a 61-year union with him. They joined First Lutheran Church in 1954 and were faithful attendees for their entire married life.  They were a couple who worked hard and spent all of their free time with each other.  They were both avid bowlers, and members of several clubs in Albert Lea.  Those clubs included the Eagles, Moose, and Elks.  Their weekend nights spent dancing or bowling were always capped by an early morning breakfast at a local restaurant that was still open at 1:00AM.  Ethel is now re-united with Ordell, who passed away in April of 2012.  The Polka music is playing, so dance on you two!

Her last 9 years were spent at Thorne Crest Senior Living Community, where she made more friendships by participating in card games, dice games, community meals, and weekly church services.  A special thanks from our family to those friends and staff who became her extended family in her final years.

A funeral service will be held at First Lutheran Church at 11:00AM on Wednesday, December 8, 2021. Visitation will be in the church vestibule starting 1 hour prior to the service. A luncheon and time for fellowship will be held immediately after the service, and burial at Hillcrest Cemetery will follow afterwards.

She is also survived by sisters-in-law Joanne (Dick) Tufte and Betty (Everett) Tufte, along with her brother Clayton and his wife, Connie Tufte, and many nieces and nephews.  She was preceded in death by her husband of over 61 years, Ordell Underland, her parents, Arthur and Edna (Hyland) Tufte, and 2 of her 3 siblings, Everett and Dick Tufte.

Memorials are preferred to Peace and Power at First Lutheran Church.  Funeral arrangements are being made by Bonnerup Funeral Service.

To order memorial trees or send flowers to the family in memory of Ethel Underland, please visit our flower store.