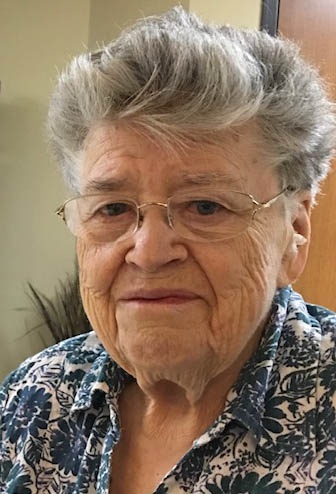 Edna Irene (Olson) Erdmann, passed away on Monday, September 9, 2019, at the age of 95. She was born on November 2, 1923 in Marshall, MN, to August and Anna (Bangston) Olson. She lived around Marshall until 1935, when they moved to Amiret, MN, where her father bought a farm. When she finished 8th grade at a rural Amiret school, she went to Marshall High School and graduated in 1942. She worked on the farm until 1949, when she started working at the Gamble’s in Marshall. It was at a Gamble’s area meeting that she met Vince, who was a Department Manager at the Gamble’s store in Madison, MN. They began dating, but when Vince was transferred to the Marshall Gamble’s as Store Manager, she left the store and went to work for her sister Hazel and brother-in-law Norman Johnson at their Red Owl grocery store in Russell, MN. In August 1953, she married Vince Erdmann at Tyler, MN, In May of 1954, they moved to Austin, MN where Vince was transferred as Store Manager at Gambles. Shortly after that move, they purchased the Gamble’s Store in New Richland from Ole Minske and moved to New Richland in August of 1954. She and Vince operated the store until his death in 1999. After his death, Edna and longtime employee and close friend Marilyn Meyer continued to operate the store until September 2015. She as active in Cub Scouts, American Legion Auxiliary, and the Congregational Church. She enjoyed gardening, baking, making quilts for friends and family, ceramics and a variety of other crafts. She is survived by 2 sons, Galen and Jen Erdmann of Pine City, MN, Darrell and Kim Erdmann of Grand Island, NE, granddaughters, Mary Erdmann, Michelle (Sean) Padden, Marissa (Michael) Grams and Anna Erdmann, grandsons Josiah and Joel Erdmann, step grandsons Willie and Adam Seals, great granddaughter Harper Padden, step great granddaughter Mary Jane Seals. She was preceded in death by her husband Vince, parents, sister Hazel and brother-in-law Norman Johnson.

Funeral Services will be at 2:30 P.M. on Saturday, September 14, at the Congregational Church in New Richland. Visitation will be on Saturday prior to the service from 12:30 p.m. – 2:30 p.m. at the church. Interment will be in Calvary Cemetery. Lunch will be provided at the church following the service.

To order memorial trees or send flowers to the family in memory of Edna Erdmann, please visit our flower store.