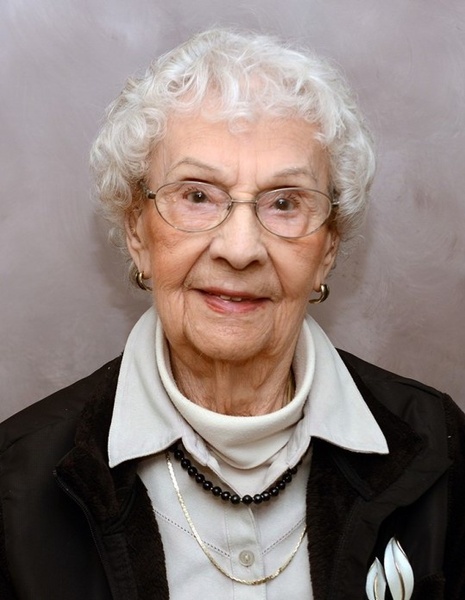 Doris Astrid (Lindberg) DeNeui was born on September 22, 1917, to George I. and Clara (Wilson) Lindberg in Duluth, MN. She attended the Washburn Elementary, East Junior High, and graduated from Duluth Central High School in 1936. She was active with her family in the Glen Avon Presbyterian Church, and at a Youth Camp, gave her self to the Lord for full time Christian service.

She attended the Northwestern Bible and Missionary Training School in Minneapolis, graduating in 1939. It was there she met Arthur DeNeui who became her husband. They were married June 4, 1940. Three children were born to them—Joel Arthur, Bette Doreen, and Paul George.

Doris supported her husband in his 40 years of continuous ministry, teaching Sunday School and Vacation Bible School, directing choirs, and acting as assistant pianist. She held various offices in their local and denominational women’s organizations. She helped so many people in so many ways.

Her interests were in raising their children and supporting their denomination’s missions. She relaxed by sewing, completing handwork, and enjoying music.

In retirement, Doris enjoyed going on many bus trips with her husband. They traveled to many states, as well as going to Germany and Israel. She took a drawing class and found a new talent in both drawing and painting. In 2013, Doris moved to Thorne Crest where she lived until her passing. At age 95, she wrote a book of her life, “Ninety New One Dollar Bills” which was published a few years later. At age 100, she had her coloring book, “Miss Mahoolala” published.

In her book she writes, “I have tried to please my Lord, be a good DeNeui, and raise Christian children. I still have Lindberg blood in my veins, but the important thing is to be ‘washed in the blood of Jesus’. And that I am!”

She was preceded in death by her parents, George and Clara Lindberg, husband, Arthur, and her brother, Dean, and sister, Clarann.

Memorials will be directed to special ministries and charities close to Dorie's heart.

To order memorial trees or send flowers to the family in memory of Doris "Dorie" DeNeui, please visit our flower store.