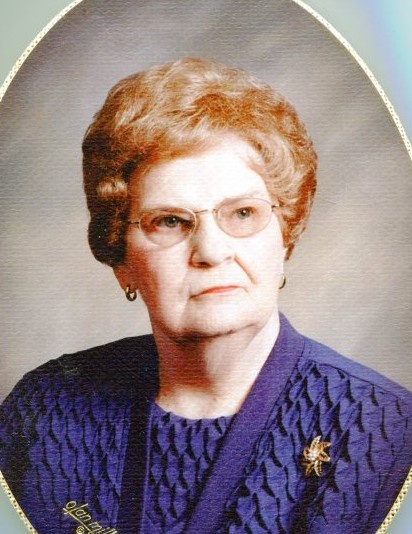 Funeral services for Doris Johnson will be held at 2:00 PM on Wednesday, August 14, 2019 at Bonnerup Funeral Service, Albert Lea, with Rev. Jennifer Gonsalves officiating.  Visitation will be held one hour prior to the service.  Burial will be at East Freeborn Cemetery.

Doris passed away peacefully on Friday, August 9, 2019 at St. John’s Lutheran Home in Albert Lea.  She was 94 years old.

Doris Jeanette (Ramsey) Johnson was born March 28, 1925 in Freeborn County to John A. and Clara (Knutson) Ramsey.  She was baptized and confirmed at East Freeborn Lutheran Church.  She attended Bell School and Albert Lea High School.  She was employed at Wilson and Co. in Albert Lea until 1962.

On December 10, 1950 she married Christopher A. Johnson at East Freeborn Lutheran Church.

Doris helped everyone, always bringing food when someone in the family was sick.  She knit and crocheted many afghans to give to family members.  She enjoyed bowling, liked watching the Minnesota Twins, and exceled at playing cards – “31” was her favorite!

Doris is survived by her brother, Gordon (Ramona) Ramsey; sister, Janice (Bob) Knutson; as well as many nieces, nephews and extended relatives.

To order memorial trees or send flowers to the family in memory of Doris Johnson, please visit our flower store.