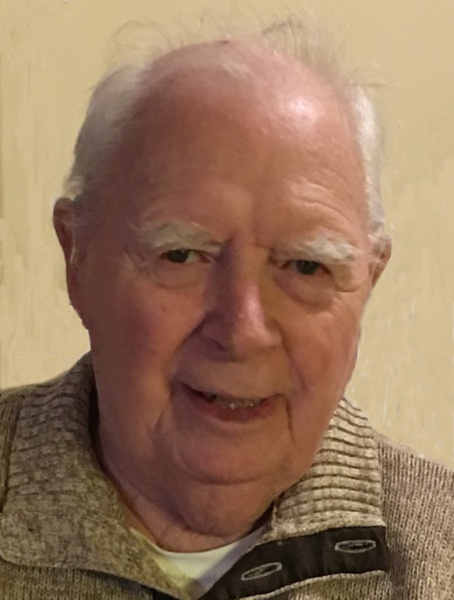 Donald Forrest Porter was born on October 28, 1923, in Northfield, MN, the son of Ray F. Porter Sr. and Henrietta M. (Jensen) Porter. He graduated from Albert Lea High School with the class of 1942. He enjoyed participating in hockey and football during his school years. He served our country in the US Navy from July of 1942 until his honorable discharge in December of 1945. He was honored to have served as a gunner’s mate on the US naval ship Gleaves. Following his return from the service he worked for the Santa Fe Railroad for more than 38 years.

He married Phyllis Tellekson, and to this marriage one daughter, Connie, was born. The family made their home in California. After Phyllis’s death, Forry married Lorraine Slette in 1977 and they returned to live in Albert Lea in 1983. After Lorraine’s death, Forry married Clarice Blesi in 2005, she also preceded in him death. Some of Forry’s life highlights include being selected to be Grand Marshall in the Albert Lea 2015 Homecoming parade, his hole in 1 on Green Lea #5 in 1989, and also Albert Lea Country Club Caddy Champion title. You could always count on Forry to put a smile on your face as he had a great dry sense of humor.

Forry died on Thursday, January 23, 2020 at Thorne Crest Retirement Community in Albert Lea. He was 96.

Private family memorial services with Military Honors will be held. Interment will be in Fort Snelling National Cemetery.

To order memorial trees or send flowers to the family in memory of Donald "Forry" Porter, please visit our flower store.