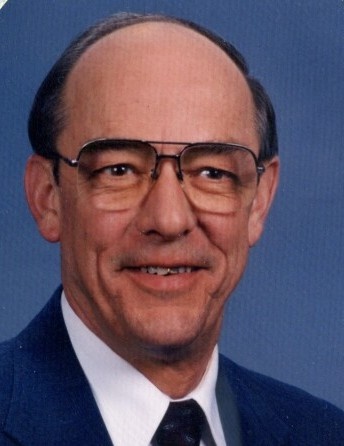 Don was born November 11, 1936 in Lakota, IA to Olvert and Adah (Telkamp) Rippentrop.  He graduated from high school in Titonka, IA, and then attended Hamilton College for Business Administration.

While at Hamilton, he met his future wife, Norieta Noordmann.  The two were married on June 14, 1958 in Ackley, IA.  After graduation from college, Don moved to Albert Lea to work as the Finance Director and Treasurer for the city.  He also enlisted in the Army National Guard, where he served for 26 years, attaining the rank of First Sergeant.  In 1960, the two welcomed their first daughter, Layle, and in 1966 their second daughter, Brenda.

Don loved sports.  He played football in high school, and later played softball on church and city teams in Albert Lea. Golf was also a favorite pastime, as was walking the Blue Zone Trails and bowling.  Don was an avid deer hunter and fisherman; the latter resulting in many trips to Canada and Northern Minnesota.  He also enjoyed gardening, and a picture of him harvesting his own carrots made the Albert Lea Tribune and National Geographic Magazine.

Don was very active with organizations.  He belonged to the Masonic Western Star Lodge #26, the Shriners, Golden K Kiwanis, Government Finance Officers Association, Freeborn County Fair Board, Red Cross of Constantine, and many other Masonic organizations.  He was a member of United Methodist Church, and served as the church treasurer for many years.  Don was also very patriotic and that was shown in all aspects of his life.

Preceding him in death were his parents, Olvert and Adah, and his in-laws, Herman and Martha Noordmann.

Funeral services will be held at 11:00am on Monday, February 8, 2021 at United Methodist Church with Pastor John Mitchem officiating.  Visitation will take place one hour prior to service.  The Albert Lea Area Veterans will provide military honors.  Interment will follow at Graceland Cemetery.  Services will be livestreamed on this page as well as the United Methodist Church website at https://albertleachurch.online.church.

In lieu of flowers, donations can be made to the United Methodist Church, the Humane Society of Albert Lea, the Shriners Children’s Hospital, or to a charity of your choice.

To order memorial trees or send flowers to the family in memory of Donald Rippentrop, please visit our flower store.