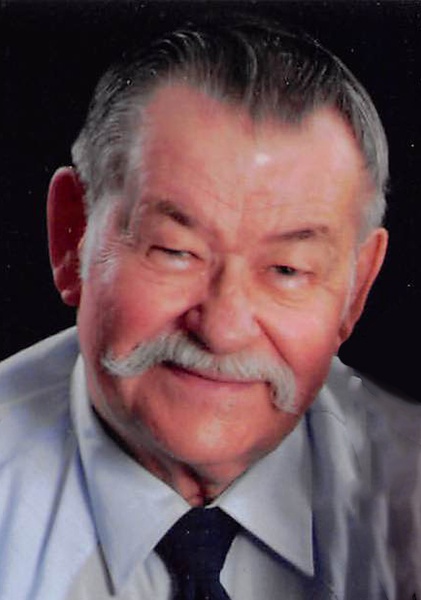 Funeral services for Don E. Johnson will be held at 3:00 PM on Tuesday, November 12, 2019 at Trinity Lutheran Church, Albert Lea, MN, with Rev. Eileen Woyen officiating.  Burial will be at Hillcrest Cemetery.  Visitation will be held from 4 – 7 PM on Monday at Bonnerup Funeral Service, Albert Lea, and again one hour prior to the service at the church.

Don Eugene Johnson was born on May 24, 1935 in Waseca, MN to parents Clarence and Leona (Metzler) Johnson.  Don attended and graduated from Alden High School.  On February 5, 1961, Don was married to Sharon (Ringoen) at Round Prairie Lutheran Church, rural Albert Lea.  To this union, four children were born.  Don worked at Wilson’s, later Farmstead for 38 years. He was active in the Moose Lodge, Eagles Club, the Union Center, and Trinity Lutheran Church.

When Don wasn’t working, he enjoyed fishing and playing the banjo for the Blue Banners, which he was the leader of the band for 60 years!  His favorite tune was the “Schneider Polka.”  He liked traveling with the band, playing all over the area.  The Blue Banners was a huge part of his life, and he enjoyed every minute of it!  When he wasn’t playing music, you could find him dancing with his wife, Sharon.  He also enjoyed going camping throughout the years.

To order memorial trees or send flowers to the family in memory of Don Johnson, please visit our flower store.