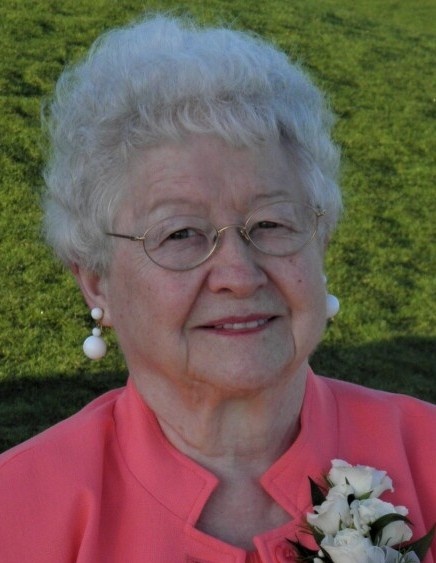 Darlene was born in Steele County on November 16, 1933, to Aaron and Lorinda (Linse) Eaker.  She grew up in Blooming Prairie and attended the school.  After graduation, she worked for a local bank.  She began dating Wilford “Bill” Van Hal and waited two years for him to return from Korea.

Darlene spent her time being a great home maker, mother, and wife.  Family was extremely important to her, and she made her life about those she loved.  She was a fantastic cook and would feed everyone until her arthritis made it difficult to do so.  She gardened and loved canning the things she grew.  She loved to travel with Bill, and together they were able to visit every state in the country.  They enjoyed many bus trips, road trips in their car, and overnights in their Winnebago.

Darlene wasn’t one to say much and she never complained.  She was a lifelong member of the Hollandale Reformed Church and spent a great amount of her time involving herself in many aspects of church life.  She really enjoyed her Bible study circle, which she attended until her health wouldn’t allow her to.

Darlene was preceded in death by her parents; two infant daughters; her sons, Bruce and Mark; and her brother-in-law, Don Teeters.

Time for visiting will be held from 5:00 – 7:00 p.m. on Friday, April 22, 2022, at Bonnerup Funeral Service in Albert Lea, and one hour before services at the church.  Funeral services will be held at 11:00 a.m. Saturday, April 23, 2022, at Hollandale Reformed Church with Pastor Neal Ooms officiating.  Interment will take place at a later date.

In lieu of flowers, donations are asked to be made in Darlene’s name to the Hollandale Reformed Church.

To order memorial trees or send flowers to the family in memory of Darlene Van Hal, please visit our flower store.